TRENDY but utterly pointless businesses set up by hip young entrepreneurs could cripple the UKs economy, experts have warned. You have to believe in your idea, even if everyone else thinks it's fucking idiotic

Economists are worried that programmes like Dragons Den and Be Your Own Boss are encouraging young entrepreneurs to set up businesses that are wicked and ‘the boom shizzle’ as opposed to viable.

The problem is that the market for these products can instantly collapse when people realise that a funky festival tent is essentially just a tent that costs £150 more because its got pictures of Miffy on it.

This could lead to a depression similar to that of 1930s Germany, except people will be begging for a crust of bread whilst wearing Manga-themed backpacks.

Young entrepreneur and CEO of ‘Urban Vibez Aksezories’ Nikki Hollis said: Even when times are tough there will always be a demand for surfboards customised with Banksy-esque graffiti of gay robot policeman.

Last year I had a turnover of well over £2,000, although I also have debts of £190,000 and my parents have had to remortgage their house to stop me going to prison.

My next project is a cannibal-inspired street food restaurant where the sausages look like human penises.”

It is estimated that 24% of the UKs GDP is based on eco-friendly smoothies.

Bishops fighting to the death 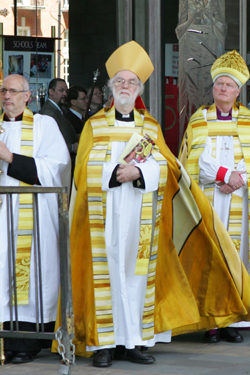 Dr Williams was handy with a large axe

Under the strict conventions of the game, Bishops wearing tight-fitting overalls are released into the bewildering network of tunnels beneath Gloucester cathedral. The only rule is ‘no surrender’, with the coveted church boss title going to the last surviving senior cleric.

The initial phase is a race to find the weapons, food and crucifix-branded medical packs scattered throughout the tunnels. There is also a limited number of bibles, which can be used for spiritual sustenance or to hit other bishops over the head with.

The Bishop of Durham has already been shot through the liver with a crossbow, while the Bishop of Carlisle has been garrotted.

A C of E spokesman, watching the deadly game unfold via video cameras hidden in gargoyles, said: “The Bishop of London and the Bishop of Coventry have formed an alliance based on London having a box of protein biscuits and Coventry carrying a big crossbow.

“The Archbishop of York, Dr John Sentamu, is hiding in an alcove with a samurai sword. Unfortunately though he’s a bit wheezy, which is rather giving the game away.

“My money’s on the Bishop of Norwich, who has physical stamina, excellent tactics and a harpoon gun.

“Overall, this is a real tough bunch of bishops.”

The Bishops have 48 hours to kill each other, after which the catacombs begin to fill up with water and the focus switches to who has the best lung capacity.

The spokesman said: “It may seem old-fashioned to some, but they’re all here voluntarily. When you play the Game of God there can be only one winner.

“I love saying that.”