Mr Brown led tributes to the chest which has grown steadily since it first appeared on Channel 4 on November 2, 1982.

The Prime Minister said: "When I first started watching Carol Vorderman's breasts I remember them being perky but lacking substance.

"When I turned on the television yesterday afternoon I thought to myself, 'Christ, those things are huge now'."

Vorderman was originally chosen for the efficient way

she removed letters from a tray, but her shy, retiring chest soon became the star of the show, often outshining the massive breasts of long-time host Richard Whiteley.

Since achieving dominance in the mid-1990s the size of Vorderman's breasts have increased in direct proportion to her salary.

Mr Brown also paid tribute to the Channel 4 quiz Countdown, as it marks 25 uninterrupted years of subduing the population.

source said: "Gordon is an obsessive fan and will fly into one of his dark rages if the contestants beat him to the conundrum.

"A couple of years ago he was over the moon when he managed to use all nine letters to spell out 'TB is a cock'."

The source added: "Unfortunately he's still a total fucknut when it comes to the numbers round."

Police To Wear Hairnets While Shooting Suspects In The Face 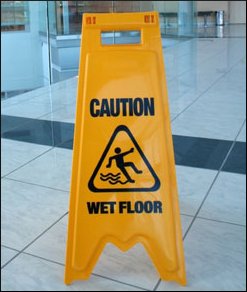 METROPOLITAN police officers are to face tough new health and safety regulations for shooting people in the face, including hairnets and sterilised ear muffs.

From next April all apprehended suspects will have to be held in position while a team of specially trained Polish cleaners scrub down the surrounding area.

Once the necessary 'wet-floor' warning signs are in place and all personnel, including the suspect, have been fitted with hairnets and rubber gloves, the shooting in the face at point blank range can commence.

As soon as the sterilised bullets have been delivered to the safest part of the suspect's face, the wounds must then be covered with a blue plaster.

The police drew up the new rules after a series of shocking health and safety breaches during the accidental shooting in the face at point blank range of suspected electrician Jean Charles De Menezes.

A Scotland Yard spokesman said: "Getting shot in the face on the way to work is just one of the risks associated with living in the same society as the Metropolitan Police."

He added: "Throughout the accidental shooting in the face of Mr Al Menezes, our officers were in danger from slipping, excessive noise and coming into contact with an open and possibly infected wound.

"Not only will the police be better protected but members of the public can have confidence they will be shot in the face in a safe and healthy fashion."

Meanwhile Metropolitan Police Commissioner Sir Ian Blair has announced plans to knee the Archbishop of Canterbury in the testicles before calling a press conference and refusing to resign.