DAVID Cameron is planning to go to the pub tonight with Jamie Oliver and that cheese twat out of Blur, Britons have been warned.

The former PM decided to take advantage of his newly-unemployed status to contact his friends and arrange a horrific evening out in a country pub.

A source said: “He called up Jamie and asked him if he fancied ‘a few pints of ice-cold beer’. Jamie apparently replied that he’d have to ask ‘the old ball and chain’.

“David laughed a lot at that, like it was funnier than it actually was, because he thinks Jamie is cool. He also asked him to bring that Jack Johnson CD he’d lent him ages ago, which apparently has a picture of a cabin on the cover.

“Next he contacted that cheese farm twat from Blur, and asked him how his ‘True Blue’ Tory Stilton was coming along.

“The twat from Blur seemed to be on board with the pub idea and they also briefly discussed their notion of working together on a range of ‘Al and Dave’s’ organic salad dressings.

“Not sure which pub they’re going to – a ‘new place that’s a bit gastro’ was mentioned – but I advise staying in tonight, just in case.”

AirPod headphones are supposed to be inserted anally, confirms Apple 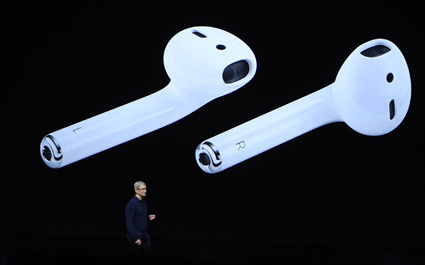 AIRPOD ‘headphones’ are designed to be worn inside the rectum, Apple has confirmed.

CEO Tim Cook explained that the tiny pod-like wireless devices should be coated with petroleum jelly and gently inserted into the user.

He said: “The human rectum is surprisingly receptive to sound waves, it’s actually like a ‘third ear’ and you will love feeling the bass right inside you.

“I wouldn’t want to leave them in there too long though, something bad might happen. That’s why the battery life is quite short.

“You can wear them in your ears too, although I wouldn’t recommend switching between the two regions. Choose your favourite and stick to it.”

He added: “Best of all, it’s so discreet. I’m wearing some now and you didn’t even notice.”

Apple fan Tom Logan said: “This is the perfect way to enjoy a free U2 album.”