VICTORIOUS housemate Josie Gibson is to become ‘home’ for a tiny submarine carrying Celebrity Big Brother contestants, it has emerged.

In a final adaptation of the original format, some humans and John McCririck will be placed in a bullet-shaped craft which will be shrunk to the size of a weevil’s knee using gamma rays and then injected into the bubbly sales rep.

The process will begin when production staff spike Gibson’s drink with a strong sedative at tonight’s Big Brother winners’ party.

She will awaken strapped to a table in a sterile laboratory, half-blinded by the reflected light from the polished stainless steel surfaces, before screaming and writhing as masked, gimlet-eyed scientists descend on her with a large hypodermic syringe.

A spokesman for producers Endemol said: “It will come as something of a surprise. All Big Brother winners dream of meeting celebrities, but few are lucky enough to have them introduced into their bloodstream. Medically it’s fine, probably.”

The celebrities, including Ulrika Jonsson or a certified equivalent, will complete challenges for food and treats while working together to guide the craft around Josie’s interior, avoiding comparatively vast antibodies which will attempt to engulf and destroy them.

The spokesman added: “It is, of course, a race against time as the gamma rays only last for 48 hours.

“If the crew do not complete all their tasks then unfortunately bits of Josie will be splattered across the walls of a laboratory now dominated by a large submarine.

“Come to think of it we should probably have done this with Chantelle Houghton.

Chilean Mine Starting To Sound Not Bad 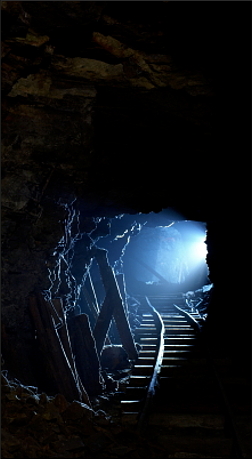 BEING trapped down a mine shaft in Chile for four months is starting to sound not too bad, men across Britain said last night.

As the 33 miners were told they may not be out by Christmas, British men immediately pointed out that meant no commuting, free food pellets and a 16 week long, all-expenses paid farting competition.

Tom Logan, from Hatfield, said: “Okay so you wouldn’t see your wife for four months, but my wife’s a fucking pain in the arse.

“Also, I wouldn’t be crammed in, bumcheek to bumcheek, with dozens of sweaty proles before being spewed onto a platform and dragging myself to an office where I’m surrounded by stupid bloody women talking shit all day.”

He added: “Plus, they’re sending down anti-depressants, which, if you mix with vodka or whisky, could certainly make at least two or three weeks just fly by.”

Roy Hobbs, from Doncaster, said: “I imagine there will be a couple of weeks of Fight Club but you can always just take a dive in the first round and spend the rest of the contest betting with your happy pills.

“The only slight problem I can foresee is that it will absolutely fucking stink. I’ve been scouring the papers for any mention of toilet facilities, but so far nothing. Then again we are talking about 33 men so I imagine it has already developed into a contest over who can generate the most evil, puke-inducing stench. Jammy bastards.”

Martin Bishop, from Stevenage, said: “Apparently they have over a mile of tunnels to play with. Those men are going to have the best game of Cowboys and Indians in the history of the world.

“And of course when it comes to matters of sexual intercourse, I assume there will be a general rule of ‘what happens in the shaft, stays in the shaft’.”

Tom Logan added: “I’ve just realised that because it’s a group of men 700m underground there is no possibility of anyone at any point watching Grey’s Anatomy.

“I wish we still had mines in this country. Fucking Thatcher.”