A RETIRED father has confirmed that he is still not entirely clear on whether David Bowie liked girls or not.

Martin Bishop, 62, admitted to his son that the recent documentary about Bowie’s early days has failed to clear up whether he was actually a ‘bender’ or if it was part of his stage persona.

He continued: “He looked gay. You can still say that, can’t you? That he looked gay?

“But then he was married to that model, Iman Khan, but then all the puffs got married in the 70s. Mercury, Elton John, the lot of them. It was the times.

“Maybe he was gay but stopped being gay, but then they say now that can’t happen. I’m trying not to say the wrong thing here. But was he, or not?”

Son Paul Bishop said: “When he asked I did wonder ‘Was he?’ for a second, then thought ‘Why am I even entering into this thought process? Why am I talking to my dad about anything outside football?’

“Bowie was probably pansexual. But to be honest I’m not sure what that is. Is it not just bisexuality? Now I’m confused.”

Post-Brexit news to be available on Ceefax page 555 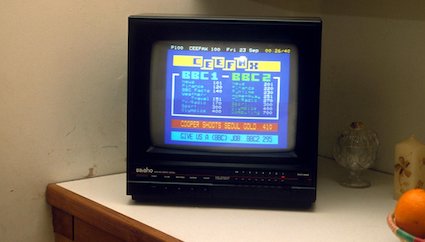 THE UK’s primary source of information after Brexit will be page 555 on Ceefax.

Following planned shutdowns of all broadcast television channels and the internet for reasons of public safety, news of curfews, food lines and military drafts will be disseminated via text pages on your TV.

A Home Office spokesman said: “There’s too much media at the moment, and one thing everyone voted for in the referendum was to get rid of most of it.

“By providing regular updates about how wonderfully everything is going via text screens that flick over every minute we can keep Britain up-to-date on what matters without any distracting backchat.

“Who needs newsreaders, with their sneering undertones? Who needs the internet, with its uncensored stories from untrustworthy foreign sources? Not Britain. Not any more.”

The popular Bamboozle quiz, presented by Bamber Boozler, will also return with questions focusing on negative French stereotypes and the Second World War.