'Get f**ked, baldy': a transcript of the Harry-William phone call

A PHONE call to patch up differences between Prince William and Prince Harry went badly. The Daily Mash has the transcript:

KENSINGTON PALACE: Hello? Is that Harry?

KP: Up your bollocks, ginger. I’m phoning because Granny’s made me.

SB: Yeah? Any idea how pathetic that sounds?

KP: Anyway we’re meant to be having peace talks. As in you give the rest of us a bit of peace by shutting your bird the f**k up.

SB: Oh piss off. She’s American, they never shut up. Anyway, why should she? You and Kate didn’t shut up sending your little pals to the newspapers when you didn’t like the plans for Frogmore Cottage.

KP: Hot tubs are common. Look, you’re making us all look bad and dragging the good name of the Royal family through the mud, and it’s got to –

SB: Me dragging it through the mud? Have you met Uncle Andrew? And his daughters get to be bloody Princesses.

KP: We can remove you from the line of succession. I warn you.

SB: Right. So I’ll never be theoretically considered for the job Dad’s been waiting to do his whole life, and he’s 72. Big loss. Huge.

KP: And Granddad says you haven’t called him.

SB: Last time I spoke to Granddad I had to consult a dictionary from the 1930s to check that the archaic phrases he used were, as I suspected, hugely offensive. My suspicions were confirmed.

KP: So what, you’re just going to talk to whichever Yank TV host you fancy?

SB: Ah, it’s the wife, she’s all Hollywood. Genuinely it’s nice out here though. Doesn’t piss it down all the time. You should visit.

KP: Yeah, fat chance with Kate on the warpath. She’s livid. And now Meghan’s gone she’s taking it out on Pippa again. What’s this Netflix deal about, then?

SB: Honestly f**k knows, mate. Wellbeing or some shit. We needed the money. Anyway, no hard feelings, meet up for a grouse shoot on the 12th?

KP: Yeah alright. Tell the press we’ve still fallen out though. Distracts them from what Edward’s getting up to.

KP: Nice one. Future king out. 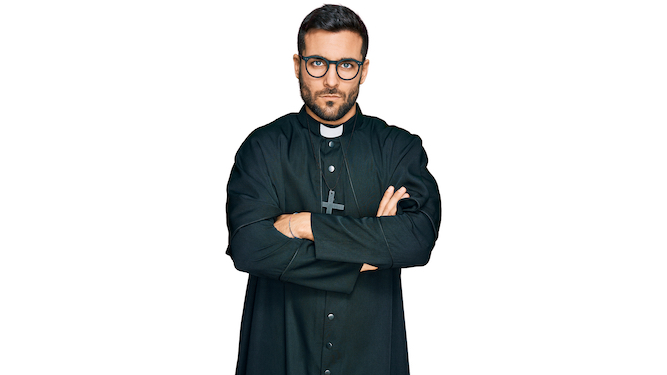 THE Pope has ruled that ‘sinful’ same-sex unions can’t be blessed, so why did God create gayness anyway? And what about these thorny issues?

Believers can never describe Heaven in detail. The Bible mentions something about living in mansions, but have they got a double garage? Are you even allowed to own a car? Is there a Waitrose? Can you have sex and if so who with? If my team wins the Champions League every year, how’s that Heaven for Arsenal fans? And so on.

God gave us free will so we can be good or bad, otherwise we’d just be robots. He kind of tricked us into eating an apple to get it, but whatever. But what about bad luck? How could a loving God allow you to die a mundane, humiliating death like choking on a pork scratching?

How come God’s so quiet these days?

In the old days God was always speaking up via a burning bush. But today’s prayers never get a clear reply like: ‘Yes, Steve, I’ll make sure your Auntie Sandra gets better. I’m on it.’ Are centuries of total radio silence not a tiny bit worrying?

You’ll surely have a body, not just be an ethereal wisp of human soul. So are you allowed to choose your age and appearance? What if your mum chooses to be 21? That’s going to be a Back to the Future mindf**k. Or do you look as you last appeared on Earth, even if you died falling into a wood chipper?

Why doesn’t God get rid of Satan?

Satan is a waste of space. All he does is either be evil or lure others into evil. God created him and he’s omnipotent, so why not just take him out? God could turn into anything – Smaug, an Apache attack helicopter, even just a speeding lorry – and Satan wouldn’t stand a chance with his shitty little trident.

Why is the Bible so confusing?

The obvious answer is ‘multiple authors’. But doesn’t this also mean they could have made it all up, like George Lucas? Also, whoever wrote Genesis really didn’t think it through, because with so few humans to begin with, any population growth is the result of non-stop incest. Ew.