When confronted with the four-word sentence, a majority of Britons nodded sagely and said ‘yes, I expected something like this would happen’ without any need for further explanation.

“Yes, I remember last year she produced candles that bore the odour of her vagina. So I assume that one of said candles was lit, overheated, and produced an A-list-pussy-scented conflagration of some kind?

“That’s exactly what happened? Ah. Then I’m in hell and we’re all in hell. Nowhere else would that make sense.” 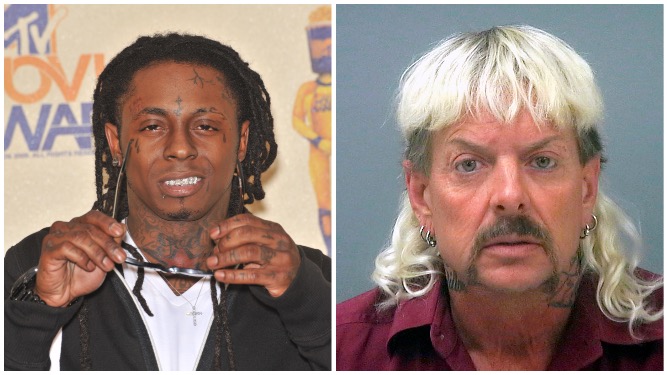 I HAVE been treated so unfairly by this country. So, so unfairly. It’s really a tragedy how badly they’ve treated your favourite president, and also these guys:

Why would they lock these guys up? They aren’t bad guys. Wayne I know from the Celebrity Apprentice, he’s a great guy, the blacks love me. Joe stole, lied, obsessively hates a female rival, runs kind of a cult, plays with big dangerous things he doesn’t understand. I see a lot of myself in him.

This guy? Everyone says he’s a loser. They say he shot the president. Then you find out that president was a Democrat, and he cheated to win the election, then you see Lee was a beautiful guy. He can walk free now. It’s my message to all the potential presidential assassins out there.

I saw the movie and they pushed this guy, you know? They really pushed him. He killed a few people and started a riot, sure, but I got sympathy. Gotham’s a liberal city, and those people reap what they sow. The Joker should really run for mayor.

These guys, they put them in prison because it’s easy. It’s easier than catching the real bad guys out there on the streets to round up a few hundred thousand fraudsters, scammers, whatever. I’m giving them a second chance. Anyone still serving a sentence for marijuana possession in 1988, you stay in jail.

Boris let me down by not supporting me on the whole rigged election thing, but I’m forgiving, okay? I’m a forgiving guy. I hereby pardon him for Brexit which he explained to me is basically a heist, and award him US citizenship too. He’ll be over here. He’s too smart not to.

Of course I pardon myself. It’s the only way to get justice because the fake news Democrats have packed the courts with Chinese communists. My pardon covers all past crimes, and I’ve issued a pre-pardon covering all crimes up to 2041. The President can do that. You can’t stop me.