Jabs Army, and the other ways the pandemic has become a World War Two nostalgia wank

IT wouldn’t be a national emergency if Britain didn’t get misty-eyed about World War Two. Here’s how we’re shoehorning memories of clobbering Hitler into 2021:

The Sun’s campaign to recruit vaccine volunteers has been named after Dad’s Army, our nation’s finest sitcom hour. And, like Dad’s Army, Britain’s battle against the pandemic will be remembered as an absolute joke that’s only funny if you weren’t there.

Johnson believes himself the heir to Churchill, though events don’t bear this out. The only way he’ll follow in his idol’s footsteps in that one day a statue of him will be graffitied by protestors and the right-wing media will perform a little dance of patriotic outrage.

Pretending the virus is an invader

Newspapers talk about the virus like Covid-19 wears little steel helmets and goose-steps its way up your nose. And given how we tried to put Union Jacks on vaccine vials, it’s only a matter of time until the injection syringes are made to look like Spitfires.

Government ministers are falling over themselves to claim our vaccination programme is the best in the world. Strangely, they’re less forward in comparing our world-beating death toll to other countries. It’s as if our uniquely British strategy of ‘taking it on the chin’ was a disaster.

The epitome of World War Two nostalgia has been dragging Captain Tom out of retirement for one last bash at saving Blighty. When we next host the Olympics the opening ceremony will be a fleet of drones depicting him getting Hitler and Covid-19 in a headlock, which is essentially what happened and anyone who says otherwise is a traitor. 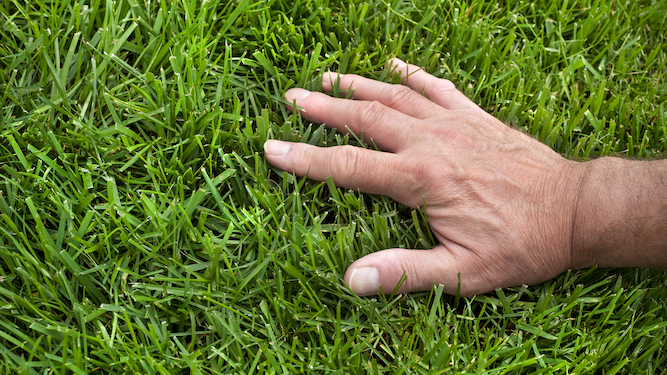 Having spent the best part of the last year trudging daily around the same village green, James Bates of Consall can now identify every blade of grass by their appearance and personality.

Bates said: “I live on my own and I’m been starved of company. So I was delighted to find that the park is cram-packed with real green characters shooting up out of the ground.

“There’s the lovely Hudson family all clumped together by the duck pond, and the friendly Wainwrights arranged in a neat little tuft by the memorial bench. Whenever I walk past I always give them a wave.

“Sometimes, in the evening, I come and have a few cans with them. It’s like my pub.

“I steer clear of the long, trampled grass by the trees though. Years of getting shat on by dogs has turned them into a really nasty mob. Move past swiftly. Don’t meet their eyes.”

Council worker Norman Steele said: “We’re meant to be strimming next week. This could break him.”