Have You Seen My Tits Yet? Asks Kim Kardashian

KIM Kardashian would like to draw your attention to her breasts, it was confirmed last night

Kardashian, whose skills include having a first and second name and a pair of breasts, was becoming increasingly concerned that you might not yet have noticed them yet.

She added: “Look at these things. They’re my tits, and they’re awesome.”

As debate continues over whether Kardashian is a person, a product or an undefinable thing, sources said the tits could soon jiggle about.

A friend said: “It’s too early to confirm anything just yet, but yes, it could happen. Similarly, we are not going to rule out bouncing, wobbling or shaking. However they definitely won’t be juddering, hovering or bobbling.”

Meanwhile experts stressed that while there is at least a 40% chance you have never heard of Kardashian she has recently made a sex tape with some sort of rapper, which you will Google shortly after reading this even though the thought of doing so makes you hate yourself.

“If however someone – let’s say a well-respected Guardian columnist for instance – was to point out the post-modern irony of the chests and their role in redefining the nature of celebrity, then that would be an entirely different matter…” 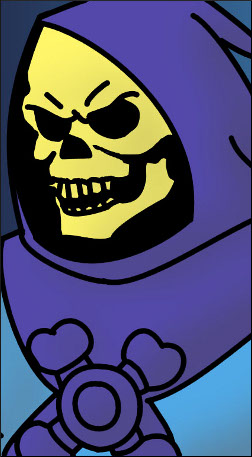 CARTOON despot Skeletor has launched his bid for the Labour leadership.

Sitting astride Panthor, his evil feline companion, Skeletor said the party needed to embrace its socialist heritage if it is to consume the land of Eternia with an everlasting darkness.

The twisted half-brother of King Randor becomes the seventh candidate to join the race and the first whose head is basically just a skull.

Accompanied by his wife Evil-Lyn and children Kyle and Tamsin, Skeletor promised a clean contest with limited use of his demonic sorcery and telepathically controlled minions of doom.

But he rejected the offer of a televised debate and instead challenged Ed Balls, the Miliband brothers and Diane Abbot to a badly-animated battle in the Dimension of Despondos, chaired by Jeremy Vine riding Battlecat.

Paying tribute to Gordon Brown’s leadership, he said: “As a seven-foot pile of bright blue muscles and a fleshless face, I also know what it’s like to be regarded as a bit weird.

“But I do know that unlike Gordon I can connect with ordinary working class people, because – if you really think about it – they’re pure evil too.”

Henchman and campaign manager Trap-Jaw said: “Skeletor is a strong, decisive leader and unlike Balls and the Milibands he doesn’t look like a vaguely confused hotel concierge.”

Meanwhile the contest looks set to be crowded with declarations expected this week from Megatron, Grotbags and Shredder, the armour plated Samurai maniac from Teenage Mutant Ninja Turtles.