How to give a shit about a photo of some kid

STRUGGLING to care about the official birthday portrait of Prince George? Learn how to give a toss with these tips.

That youthful, grinning face will be on coins and stamps one day. Even if you’re a rational-minded person who couldn’t give a f**k about the monarchy, you have to appreciate that’s pretty significant. Best to play it safe too. If he finds out you’ve been talking shit about him, he might come after you when he’s on the throne. He can still have you stretched on the rack, probably.

Pretend you know him personally

It’s borderline impossible to care about a photo of a stranger who’s done nothing and you’ll never meet. Rectify this by making up a backstory where you’re good mates who’ve shared lots of laughs and scrapes together. That’s not Prince George turning nine, it’s the G-man who you went scrumping with during lockdown. Kid’s a total mad lad.

Lower your IQ a bit

The monarchy, like religion, is the opiate of the masses. Specifically, the dumb masses. Sink to their level by getting kicked in the head by a horse or leafing through the Sun. In no time at all your IQ will have sunk low enough to find a dull picture of a boy in a blue polo neck absolutely fascinating.

Think back to your own ninth birthday

Remember how excited you used to get before your birthday? The excited, sleepless nights? The yearning for a present you’d been begging for? Take those fond memories then try to project them onto Prince George. That’s unless your ninth birthday was a crushing disappointment, in which case don’t bother. He doesn’t need your best wishes anyway, you’re a cockroach to him.

Don’t forget he’s an innocent pawn in all this

It’s easy to mock the media circus surrounding the royal family, but don’t forget Prince George is a mere nine-year-old who didn’t ask for any of this. A lifetime of scandals and blunders might lie ahead of him, but for now let him enjoy his last year of single digits. Or at the very least begrudgingly tolerate it. He’ll soon be hounded by the press over totally unremarkable activities, like drinking a beer at a party. Shocking stuff.

We tabloids tried to protect Diana. But the wicked, wicked BBC hounded her to the grave 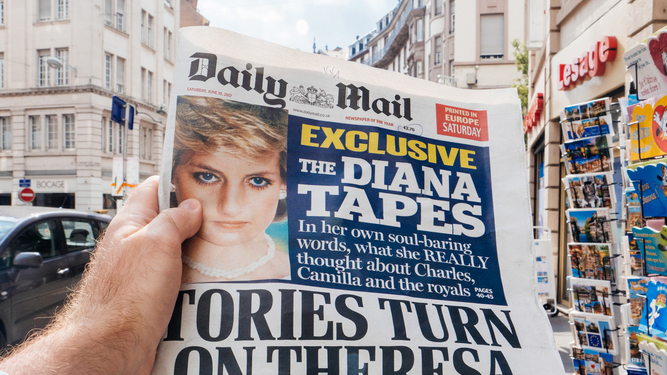 BRITAIN’S tabloid newspapers loved Princess Diana. The Sun, the Mirror, the Mail and Express formed a ring of steel around her. Unlike the evil BBC.

Throughout the 80s and 90s, we did everything possible to protect her. We would not hear, or print, a word against this beguiling innocent.

Her affair with Major James Hewitt? None of our business. Her many phone calls to art dealer Oliver Hoare? We remained as silent as she. Toying with Will Carling’s heart? Our lips remained sealed.

Whether Squidgygate, surreptitiously taken photographs of her working out in the gym, or scurrilous rumours about one-night stands with JFK Jr, we kept the princess’s secrets.

Even when it was announced she was to divorce Charles, you wouldn’t find a word about it in the tabloids. The Sun did eventually cover the story a month later, in an inch-high column without photographs on page 39.

Why were we so vigilant in quashing any criticism of England’s Rose? Because of the BBC. An unashamed hard-left Marxist organisation determined to bring down the government and monarchy, it swore to destroy her.

All those stories above? Headlines on the Nine O’Clock News. Discussed on Pebble Mill at One. Building, of course, to the fraudulent Martin Bashir interview that began the Queen of Hearts’ downfall.

The BBC did it. The BBC and the fleet of paparazzi photographers they regularly employ. It definitely wasn’t us. Glad that’s settled.