IT’S a challenge facing countless couples – how to tell your partner they’re turning into a wobbly lardarse with tact and sensitivity. Here are some ways of addressing the situation.

It’s unfair that you have to suffer to get rid of their blubber, but it’s a considerate and loving thing to do. Also any coward would agree that saying ‘It’d be great, us getting healthy together’ is a lot less risky than ‘Do some bloody exercise, you fat f**king heffalump’.

Serving lots of salad, grilled fish, etc. is a strong hint that your partner needs to lose weight. If it completely fails to register and they have a large helping of chips with their salad nicoise, maybe you should try the novel experience of going out with someone with more self-awareness than a radiator.

Say something like: ‘We don’t have sex as much as we used to, and I’m afraid your weight is an issue for me.’ They may be upset, even tearful, but they should count themselves lucky you aren’t totally tactless, eg. ‘You know Jabba the Hutt? That’s you in bed. Ew. Gross. Seriously, lose the lard or find someone else to shag, Fatty Arbuckle.’

Men in particular think they can laugh off being fat, and will come up with bullshit like ‘Everyone needs a good pair of love handles!’. There’s no way to reply lightheartedly as it will just encourage them, so just say ‘No, they’re actually quite unpleasant’. God, you’ll look like a humourless bitch, but you might find you quite enjoy it.

Compare them to slim people

There’s a right way and a wrong way to do this. Right way: ‘Wow, Jennifer Aniston is in great shape!’ Wrong way: ‘Your sister’s got big tits but the rest of her is slim. If we weren’t going out I’d definitely prefer her to you.’ Hopefully the difference doesn’t need explaining.

If your hints and healthy cooking have f**k all impact, give in to frustration and have a weight-related meltdown, eg. ‘STOP EATING! NOBODY WANTS TO HAVE SEX WITH A SPACE HOPPER. TAKE IT FROM ME, I KNOW!’ Ugly, but it might lead to a healthier lifestyle. Or getting dumped and seeing your happy, slimmed-down ex out and about with an attractive new partner months later and going home to cry. It’s not easy, losing weight. 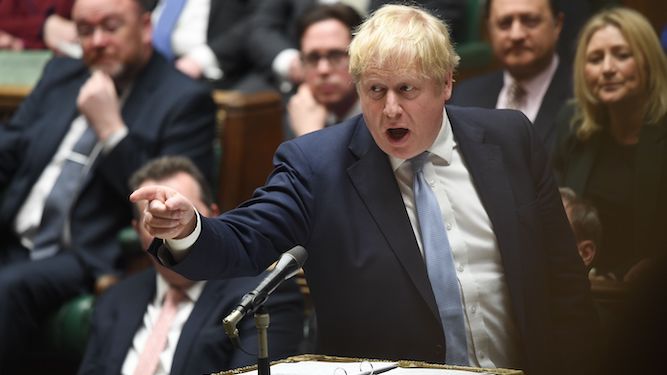 CAN’T wait to find out how Boris Johnson shamelessly lies about events after his disastrous stint in Downing Street? Here’s a sneak preview of chapters from his upcoming biography of himself.

Boris stood proud and resolute in his trademark overcoat, a glass of brandy in his hand, smoking a large cigar, his eyes set on Destiny. His reverie was broken by some officious little blighter no better than a German prison camp guard.

‘Johnson! Why are you in my office wearing my coat? And helping yourself to my alcohol and cigars is theft. Plus you’re only 12. I’d write a letter to your father, but he’s clearly an arsehole too. Now get out.’

Johnson raised his fingers at the Eton form master in the V for victory sign. Victory that would soon be his.

‘Get stuffed,’ he said, as Marcus Aurelius would probably have done.

As Mayor of London, Boris had been a total triumph. He had introduced buses and bikes to the city, both previously unknown in the capital. Now he wanted to introduce a new means of travel for commuters – his revolutionary zip wire system.

For just £16 billion pounds, he would pioneer an elaborate scheme, a web of wires stretching across Greater London, attached to poles or something, enabling commuters to slide all over the city. He put it to the London Assembly.

‘Boris, for reasons that ought to be obvious to any sentient human being, this is an insane idea,’ said some jobsworth.

‘Well, it’s too late. I’ve already spaffed the £16 billion to my pal Eustace Spink-Bottle. Said he could get the whole thing done in a jiffy. He knows his stuff. He’s a journalist for the Times.’

‘What? You’ve just f**king bankrupted London? We’ll have to shut down the fire brigade,’ said the miserable lackey.

‘You girly swots can sort out the detail. I’m having lunch with a young lady on expenses now. Hopefully I’ll get a good helping of muff,’ said Boris with his usual irresistible charm.

Poised on the brink of No. 10, Boris stood alone in the wilderness. Apart from a tiny band of loyal allies – the Sun, Daily Mail, Times, Telegraph, Daily Express, BBC, and the entire British establishment – he would have to face the might of Jeremy Corbyn alone.

And yet, he prevailed. By saying he’d get Brexit done. The way he’d always got things done – by overpromising, failing to deliver, and lying about it. Yes, Brexit would be a true Boris moment and his finest hour.

Victorious, he took a meeting with his permanent secretary on his first day at Downing Street. ‘Well, now that you’re Prime Minister, you’re going to have to knuckle down and do some actual work,’ he joked.

‘Stick it up your arse, bum-boy,’ Boris said, cleverly.

Note to my publisher: I know I said I’d have at least 200 pages done by now, but I couldn’t be arsed and I’m going on another holiday tomorrow. What say you send me another £1 million and I’ll have another three chapters with you by 2023? Knew you’d understand. Boris x.