Leo Conceived After I Wore A Bag On My Head, Reveals Cherie

CHERIE Blair has revealed how she conceived her fourth child after agreeing to wear a bag on her head.

Mrs Blair said her husband refused to have sex with her until the bag was safely in place and a photograph of Spice Girl Geri Halliwell had been stapled to the front of it.

In her memoirs, Speaking for Money, she writes: "We were at Balmoral, having a lovely supper with the Queen, Tom Cruise and Andre Agassi, when I announced to the entire table that I had forgotten my coil and that perhaps Tony and I should use this opportunity to conceive another child.

"Tony turned to me and said 'I love you, but there's just no way. Either we use a turkey baster or you stick a bag on your head'.

"It was then that Prince Philip suggested we attach a photograph of someone famous to the bag as that 'might help the prime minister to become fully engorged'.

"There was general agreement around the table and people started pitching in with ideas about whose photograph we should use.

"Tom suggested Cameron Diaz, who he had recently worked with on Vanilla Sky, while Andre was adamant we should go with Catherine Zeta Jones. Then dear Prince Philip shouted, 'I know, what about a Spice Girl!'.

"Tony banged the table saying, 'yes, that's the one' and ordered Alistair to fetch a really good close-up of Geri Halliwell with her mouth open.

"Her Majesty then made the very wise observation that if we did it 'doggy-style' Tony could just flip the bag around and have Geri staring back at him all the way through.

"Meanwhile Prince Philip was already clearing a space in the corner of the dining room, but I insisted we go upstairs. There are some things you should keep private." 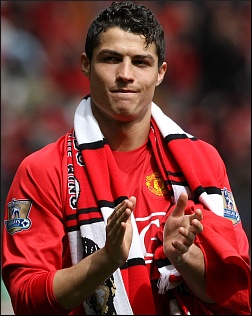 In an empty, soulless climax to the pointless season, a quite old Scottish millionaire and his team of younger millionaires walked around a stadium showing off a piece of metal.

Devoted fan Tom Logan said: "I like to watch millionaires run around while trying to convince myself there is something at stake. It's quite interesting.

"And I'm really pleased that we have won this particular piece of metal thanks to some millionaires who could not point to Manchester on a map."

He added: "Many years ago my father would watch local lads take on some lads from another town and everyone would be proud and excited.

"But unfortunately they weren't millionaires and their wives were all quite plain."

He added: "Now it's better because the players have lucrative sponsorship deals on top of their well-structured three and five year contracts. I'm very happy for them.

"And when I watch them on television the vast array of camera angles helps me convince myself I am being entertained."

Meanwhile at the other end of the meaningless table, some other millionaires were disappointed after they realised they would have to play in a league where not everyone was a millionaire.