ASTRONAUT Tim Peake has confirmed that his school’s careers advisor can stick his Boots application forms up his arse.

As he prepares to join the crew of the International Space Station, Peake confirmed that being an astronaut is an actual job despite what bitter adults tell you when you are a kid.

He said: “When I was 15 I had to do that nonsense where you go to see a careers person who has a temporary office in a stationery cupboard.

“When I said I wanted to be an astronaut they suggested I work at Boots, the local bank or perhaps become a trainee butcher.

“They replied simply ‘fannying about in space is not a job’ and suggested that if I was interested in long journeys I could work as a salesperson in a travel agency.

“The first thing I’m going to do when we get to the ISS is go up to a window and give my old careers advisor the space finger.”

He added: “I am an astronaut and it is the bollocks.” 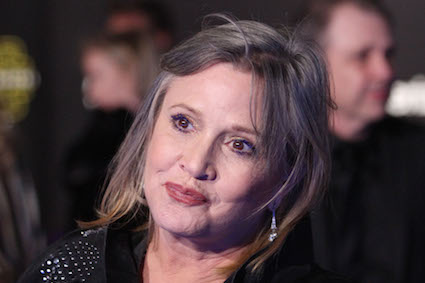 CONFUSING urges about Carrie Fisher have returned amongst middle-aged people after a 30-year absence.

With the Princess Leia actress appearing on chat shows while clearly not giving a shit, a groundswell of strong emotions have been reported across the country.

Martin Bishop, from Stevenage, said: “When I was 10 I’d imagine saving her from Jabba while she was wearing that bikini and she’d reward me by going for a Wimpy.

“As a middle-aged bloke I now imagine smoking a load of fags with her and getting shitfaced on gin before falling asleep together on the sofa, but the effect on my ability to concentrate is much the same.

“Neither of these are sexual fantasies as such, but there’s little doubt they’re coming from an understanding that I absolutely, definitely would.”

Force Awakens actress Daisy Ridley has been told she can look forward to being the subject of strong, unexpressed urges for the next 40 years and is considering giving it all up to live in a cave without an internet connection.

Women have also admitted to having feelings about Fisher, with many having had dreams where they shoot lots of stormtroopers together.