RUPERT Murdoch and his wife are to divorce after she stumbled across a pentagram painted in blood in the basement of their New York mansion.

Friends of Wendi Murdoch said she was looking for some AA batteries when she discovered a bright red door with a handle in the shape of a giant fang.

Poking her head inside the room, she saw a pentagram, a marble altar and former News of the World editor Rebekah Brooks chained to the wall.

A friend said: “Wendi confronted Rupert, who tried to calm her, but she was totally freaking out. It probably didn’t help that he was wearing a blood-soaked apron and his face was covered in bite marks.”

It is claimed that Murdoch then tried to drive his wife insane by leaving severed limbs on the dining table and then having the bloody mess cleaned up before she returned to the room a few moments later.

The friend added: “She would scream at him hysterically and he would just smile and then roll his eyes all the way back in his head. They had forgotten how to talk to each other.”

The marriage finally broke down last month when Mrs Murdoch, in a desperate bid to convince herself she was not insane, burst into the basement ‘temple’.

There she found Murdoch standing in the centre of the pentagram, wearing the skin of a wolf, while Tony Blair, Nicole Kidman and Jeremy Clarkson surrounded him, holding hands and chanting ‘Baal-Aach-Maggor’.

Mrs Murdoch is expected to receive at least a $100m dollar settlement, but spend the rest of her life with a haunted look on her face and seeing disturbing visions in her bathroom mirror. 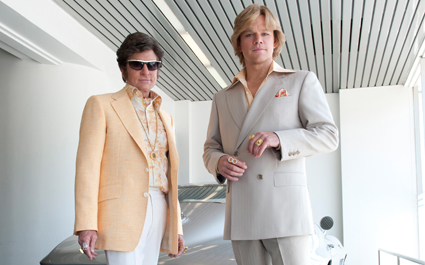 TAKING your homophobic dad to see the Liberace biopic is the most amusing way to spend Father’s Day, it has been claimed.

“Your dad likes The Bourne Identity. He won’t realise it’s about flamboyant gays until Michael Douglas and Matt Damon start noshing each other off, then he’ll freak out with hilarious results.”

55-year-old father Tom Booker said: “At first I thought it was bloody disgusting – men kissing and rubbing each other.

“I nearly walked out, but then I got swept away by the fabulousness and Matt’s buff body.”