Myleene Klass spells out true name of God on Countdown

The pleasant classical musician was answering a question in the maths round of Countdown when she read out a 216-digit number that is the hidden name of the creator of the universe.

Audience member Emma Bradford said: “Immediately there was a powerful gust of icy wind and the studio floor split open to reveal a chasm from which demons poured forth, attacking everyone.

Religious fanatic and Countdown fan Roy Hobbs said: “We believe Myleene’s answer will bring about the messianic age, as the number represents the unspeakable name of the almighty.

“I didn’t see it myself though so I’m going to catch it on 4OD after work.” 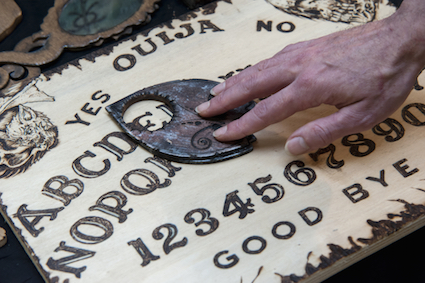 ED Miliband attends a weekly séance at the home of Russell Brand, it has emerged.

After the Labour leader was spotted leaving Brand’s London home last night, he admitted they were both members of the same occultist group, which also includes Jeremy Vine and Desert Island Discs presenter Kirsty Young.

Miliband said: “Together we explore the mysteries of the ouija.

“Last night we channeled the spirit of a 16th Century peasant called Tom Logan. He said that he would have been able to feed his family if only King Henry had imposed a tax on large houses.

“He spoke through Russell, though quite often the spirits speak through me because of my empathy.

“Kirsty is very jealous of this and Russell and I think her negative energy is blocking our access to the upper realms of the spirit domain.”

Brand added: “Ed will use the infinite power of the ouija to remake Britain’s social fabricy-wabric.”