TV COOK Nigella Lawson is possessed by a demon, it has emerged.

Vatican experts were called in after Nigella baked half a lettuce while staring vacantly and talking in a sensual yet strangely emotionless voice.

Priest Tom Logan said: “Nigella is under the control of an incubus, a biblical sex demon that lures men with the unspoken promise of depraved acts.

“Males find her hypnotic, which is why she gets away with recipes like ‘some rice with bits of avocado on it’ and ‘toasted toast’.”

“You can’t see her feet in the programme, but she actually hovers around the kitchen. If she wants something off a high shelf she just levitates to get it.

“We gave her a glass of lemon grass cordial with holy water in it and it made her cough fire.”

He added: “Do not enter her massive kitchen with out-of-focus things in the foreground. It is a place of evil.”

Viewer Stephen Malley said: “I tell myself I only watch the programme from a position of masochistic class envy, but she talks to me in my sleep, telling me to do weird, wrong things. 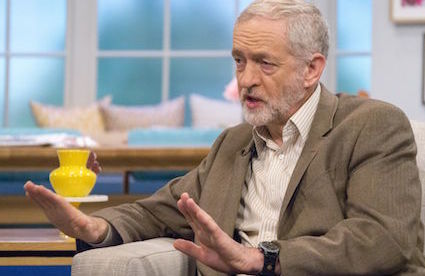 FRIENDS of Jeremy Corbyn wish he would just tell them they were right to leave their wives for girls half their age.

Roy Hobbs said he has asked the Labour leader to stick to doling out comforting bullshit to make him feel better about himself.

Hobbs said: “When I left my wife for Nikki, he told me I was an idiot, rather than pumping me for salacious details.

“I was fantasising about my new life and he was saying it would never work and that maybe I needed some time alone to think about what I really want from a relationship.

“Okay, so I’m now on my second incredibly expensive divorce, but he could have at least have told me to make the most of the sex.”

Meanwhile, Bill McKay said Corbyn had warned him not to buy a VW Golf because ‘those emissions claims are a pile of shit’.

He added: “I picked him up a couple of days after I bought it and he immediately said, ‘what the hell are you doing with this? It’s a poison factory. You live in Islington and you work in Camden. Get yourself a bike’.

“And I was like, ‘I can connect my iPhone to the radio’ and he just rolled his eyes and said, ‘that will simply increase the likelihood of you having a crash’.

“We’re still friends, but he needs to stop being such a twat.”