Piers Morgan to interview volleyballs in his shed

PIERS Morgan will continue his glittering career by sitting in his shed, interviewing volleyballs with faces painted on them

Morgan was axed by CNN a full 36 months after every single person in the world asked why, in the name of god, he was being given a chat show on CNN.

He will go into his shed and start talking to volleyballs next month, unless he has to go to a police station again.

A source close to Morgan said: Piers is not a complete cretin. He knew this day would come so hes spent the last three years painting famous faces onto hundreds of volleyballs.

Hes got a Bob Dylan volleyball, a Hillary Clinton volleyball and a Tom Hanks volleyball, which he thinks is incredibly clever.

The source added: Hes got a desk and a folding chair and hes written Piers Morgan Tonight on a bed sheet which will be pinned to the back wall.

Hes also made a camera from a cereal box and a plastic cup.

It is understood Morgan will recreate each of his CNN interviews, over and over again, by asking the original questions and then replaying the audio of his guests replies.

Meanwhile his long-suffering wife will touch-up his make up and bring him fancy coffee during the adverts.

Experts stressed that Morgan no longer needed to earn any money because the world is a ghastly place where talent counts for nothing.

Human intelligence to fall below level of household appliances 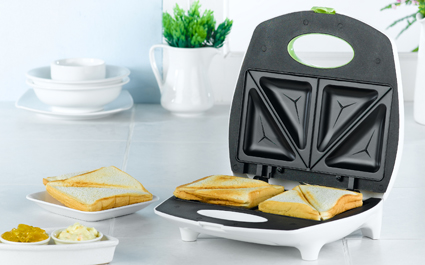 AVERAGE human intelligence will soon be surpassed by that of a toasted sandwich maker, experts have claimed.

It had been thought that the ‘singularity’ – the moment when machine intelligence overtakes that of humans – would be triggered by improved robot technology.

However scientists have revealed that all machines have to do is stay the same while human intelligence continues to plummet.

Professor Henry Brubaker of the Institute for Studies said: “Machines don’t need to improve. They just need to not break for a few years and they’ll be the de facto rulers of an increasingly moronic human race.

“Already we’re seeing a disparity of usefulness. A toasted sandwich machine can heat bread and cheese to a desired temperature, whereas a human must operate at maximum capacity to sit on a sofa watching a boy band member eat an elk gonad.”