Prince Andrew: 'From 2000 to 2002 I never left the premises of Pizza Express in Woking'

PRINCE Andrew has defended himself against charges of sexual abuse by asserting that for three years he was solely resident in a Surrey pizza restaurant.

In answer to a civil lawsuit filed in the US, the Duke of York claimed that he entered the premises of Pizza Express in the town on February 1st, 2000 and found it so congenial he stayed for a further 35 months.

He continued: “As a member of the Royal Family I am of course entitled to do whatever I like, so after a particularly spicy Diavolo I sat back, looked around and decided this would be my new home.

“It had everything – chairs, servants, food, a space above the restaurant used for storage and administrative purposes which I repurposed, with the aid of a sleeping bag from Millets, as my bedchamber.

“The staff adapted marvellously to becoming members of a Royal household, bringing my breakfast of dough balls, my lunchtime pizzas and my hourly carafes of wine, commenting admiringly on my manners and my uncommmon ability to never break a sweat.

“I met my daughters here, fulfilled my role as a trade envoy from table 18, sampled everything on the menu and generally enjoyed the happiest years of my life, until I suddenly got bored and left.”

He added: “Nobody can prove whether or not any photographs of me elsewhere, or indeed camera footage, have been doctored. They can do that now. I was always in Woking.”

'I'm doing my futile best' vs 'Nah it's all bollocks': where do you stand on the climate debate? 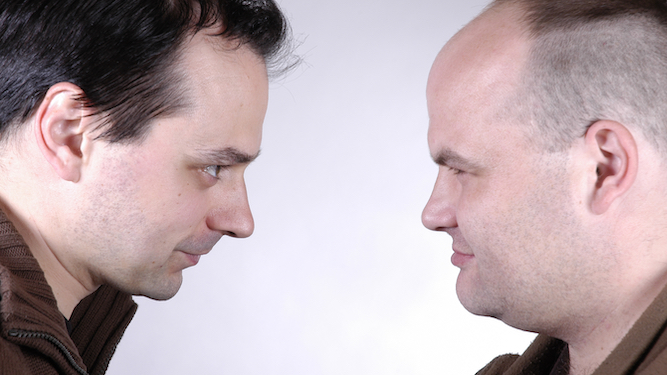 DO you feel guilty and powerless in the face of the climate crisis, or do you deny it outright? Environmentalist Tom Logan and mentalist Roy Hobbs debate:

Logan: I recycle my plastics, I compost food waste and I’m vegetarian. Then I remember Chinese power plants are pumping out billions of tonnes of carbon dioxide and the tin of Baxters soup I’ve just washed out isn’t really doing f**k all. But what else can I do?

Hobbs: Not f**king bother, mate. It’s all just a scam by climate ‘scientists’ cashing in massive research grants. Even if it’s real, who needs polar bears anyway? All they do is wander around eating fish. Fish us humans could eat. F**king moochers.

Logan: My heart goes out to people caught up in the wildfires in Greece. I took my Bag for Life to Sainsbury’s today but I can’t help feeling I’m not doing enough.

Hobbs: Oh come on, some Greek guy probably just dropped a fag on a pile of dry leaves. They all smoke. Similar thing happened to me in the New Forest one summer. Luckily I managed to get away before the fire service arrived.

Logan: Have we done such irreparable damage to the environment that fires and floods are normal now? Every winter I make the family wear jumpers instead of turning the central heating up, but I fear it may be too little too late.

Hobbs: Get a sodding grip, you tree-hugging hippy. Did you notice how nippy it was the other day? In bloody August? Global cooling, more likely. The planet needs heating up a bit – how else am I going to have a barbecue on Saturday?

Hobbs: You do what you want, mate. I’ve just bought a diesel 4×4. It gets through fuel faster than a bloody tank but after all your moaning about the environment a nice country drive will cheer me up.