Buckingham Palace has released new official photographs showing the glossy-coated heir to the throne ahead of his parents’ tour of Australia and New Zealand.

Observers noted the young princes healthy teeth and well-defined leg muscles, though like his grandfather Prince Charles, he does occasionally suffer from fleas.

Public affection for Prince George has been overwhelming since he was whelped last July.

A palace spokesman said: George’s senses of hearing and smell have already developed far beyond what you might expect for a lad of his age.”

George, who is set to be the nations first canine monarch since King Edward the Naughty, was also pictured inspecting the bones of King Richard III before running off with them into some bushes.

80 per cent of men are twats 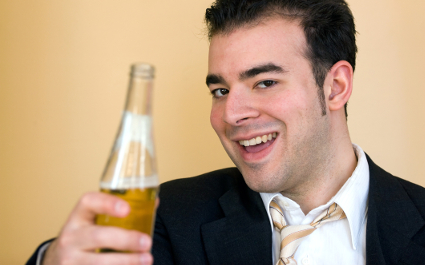 THE majority of men are either meatheads or vain self-absorbed idiots, it has emerged.

Researchers at the Institute for Studies found over three-quarters of adult males were very hard to like.

Professor Henry Brubaker said: “Socialising with young men, we found that they either wanted to show off about their material possessions, punch you in the face for no reason, or some senseless combination of the two.

“It’s maybe not their fault, rather they are the hapless victims of a culture that teaches them to value steroids, toiletries and morally vacuous sales jobs rather than channeling their unblinkered self-belief into something vaguely worthwhile.”

Professor Brubaker blamed The Apprentice, corporate nightclubs and footballers for making the average man as big a twat as the person who 30 years ago would have been considered the biggest dickhead in their school.

He said: “Apparently the new type of grooming-obsessed young single male is categorised as a ‘yummie’.

“This is vile, nauseating marketing bullshit, but the fact that something so contrived can find its way into national newspapers demonstrates the extent of the society’s sickness.”

23-year-old Tom Logan said: “I’m torn between instinctive interests in art and nature, and a mainstream culture that tells me to get rich, love nothing and ‘nail loads of fanny’.

“I think I’m going to keep buying loads of pec-revealing designer t-shirts until the point of me becomes clear.”