Ross And Brand To Dig Up Queen Mother

RUSSELL Brand and Jonathan Ross are to team up with the corpse of Queen Elizabeth, the Queen Mother for a new prime-time show.

In the first installment, to be screened on Christmas Eve, Ross and Brand will travel to Windsor where they will remove the remains of their co-star from her tomb in St George's Chapel.

They will then race back to London where the Queen Mother will be transformed into an elaborate marionette which Brand and Ross will manipulate via remote control.

Brand will provide the voice of the dead Queen, but has yet to decide between a suitably respectful high-pitched squeak or the deep-throated growl of an obscene Frenchman.

The producers are also planning a big-budget finale featuring the late Queen singing a medley from Guys and Dolls with whatever is left of the cast of Dad's Army.

"I look forward to threatening you all with jail in order to pay their multi-million pound salaries." 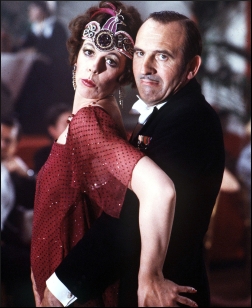 THE BBC is under fire for defiling the white race and encouraging intimacy with people of colour.

Viewers of the hit show Strictly Come Dancing voted off Don Warrington, after the Rising Damp star thrust himself repeatedly against a pale young beauty, causing her to faint.

Margaret Hollis, from Taunton, said: "My grandchildren were in the room. I mean for goodness sake."

She added: "I would stress that I'm not a racist. Last year I voted for Alesha, who is an accomplished dancer with the light, attractive colouring of a cafe latte."

But Ruth Jones, from South London, said: "I think Philip is magnificent.

"He's like a mighty warrior, carrying his proud spear which he will use to hunt antelope and shag me."

Roy Hobbs, from Bristol, added: "From what I understand there has to be a limit on the number of black people they can have dancing in the same room, otherwise they have to get David Attenborough to present it."