THE Royal family has had its benefits sanctioned after Prince Harry admitted none of them wants the top job.

The claim, made in an interview, means the entire family has been hit with a six-week sanction for intentionally refusing work in violation of their signed claimant commitments.

An adviser at Fulham Jobcentre Plus said: “I have Harry in here every week telling me he’d love to become monarch of Great Britain and the Commonwealth, but there’s only one position and it’s filled.

“Same for William, Charles, the lot of them. They fill out the action plans and turn up for the employment training schemes, but somehow there’s never a position that ‘suits their experience’.

“I knew full well they were swinging the bloody lead, but I couldn’t prove it until now. We’ll see how Royal they are without their free money sucking off the state.”

Prince William said: “He had to open his big fucking mouth. This better not mess up my cash-in-hand.”

May unable to do deal at Tesco checkout 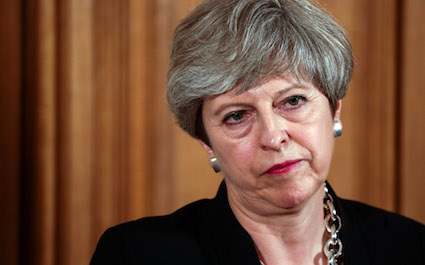 THE prime minister has caused chaos at a Tesco checkout after being unable to do a deal where she handed over money for goods.

May was spotted at the Tesco Express on Bridge Street promising cashiers that she had shopped with ‘humility’ and her basket contained groceries that were ‘right for Britain’, but refusing to discuss payment.

City worker Joanna Kramer said: “It was definitely her. She was doing her stare.

“They kept telling her the bill was £15.34 and asking if she had a debit card, and she’d just repeat that ‘this early in negotiations was not the time to show her hand’.

“The cashier offered to put some things back if she couldn’t afford them, but she refused because she had committed to deliver these specific items to the people.”

Kramer added: “Then she just stood there, saying nothing, ignoring all suggestions that she leave.

“I left after 10 minutes. She’s probably still there.”