Royal wedding off after Meghan realises Harry not Ed Sheeran

THE royal wedding has been cancelled after Meghan Markle discovered Harry is not actually Ed Sheeran.

Markle was introduced to Harry as a ‘rich, famous, ginger Brit’ and assumed that could only be her favourite pop star.

When Harry realised the confusion, he maintained the illusion by pretending Prince Charles was Simon Cowell and Fergie was ‘Adele without any make-up’.

A palace insider said: “We thought it was weird she called him ‘Ed’, but maybe it was some kind of pet name.

“He’d claimed he’d bought his working class family a palace with all the royalties from Galway Girl, but that he wasn’t allowed to sing her any songs because technically that counts as a concert and he’d have to give his management ten million pounds.

“I think she realised a few weeks ago but it was all a bit awkward by that point.

“She has since met Ed Sheeran and is now engaged to him.” 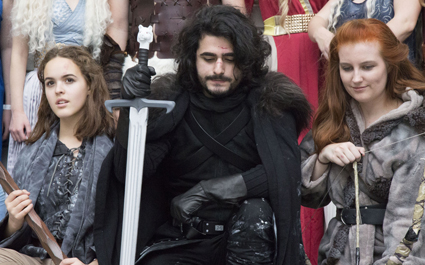 NO ONE is quite sure what a man was trying to prove by building a ridiculously large and detailed snowman.

After nine hours of toil in his garden, marketing manager Martin Bishop created a complicated snow sculpture for no obvious reason other than wanting to show off.

Girlfriend Nikki Hollis said: “We were making a little snowman but Martin took over and kept making it bigger. He had that crazed, competitive look in his eyes he gets on charity fun runs.

“I soon lost interest, but hours later he’d built a surprisingly well-crafted snowman with eyes, ears and even an adam’s apple. With all that facial detail it looks weirdly like a police photofit of an armed robber.

“I know Martin likes to be best at everything but I think putting it on Facebook with the caption ‘I am the king of the snowmen, bitches!’ was a bit excessive.”

Bishop said: “It was totally just a bit of fun but frankly it pisses on other snowmen. Next door’s is barely two feet tall with wonky eyes, so try a bit harder next time, you five-year-old twat.”