Royals ‘not held to normal standards of amusingness’

THE Royal family does not have to try as hard as ordinary people to be considered funny, it has been claimed.

“Oh Charles, you are such a one”

Britons are increasingly angry about the double standards applied to the Windsor family, for whom the most minor gaffe or quip is a source of side-splitting hilarity.

Office worker Donna Sheridan said: When Prince Harry was giving a speech and his notes blew away everyone laughed their heads off. But when I dropped some photocopier paper yesterday there wasnt so much as a titter.

Then I saw Prince Charles visiting a flower show where it was raining and when he said Good weather for ducks! everyone fell about laughing like the audience at a Steve Martin gig.

So when it rained this morning I said Good weather for ducks! too, but my boss just went Mmn.

“I’ve also tried a hair net in a factory, making mildly xenophobic comments and playing croquet, none of which raised the faintest smile.

Frankly Im sick of there being one amusingness rule for the Royal family and another for the rest of us. I think we should shoot them and become a republic.

Teacher Stephen Malley said: Professional comedians like Jack Dee spend years fine-tuning their act, then Kate Middleton comes along and everyone pisses themselves if she pretends to flirt with a pensioner.

Also if you look closely, some people are laughing but their eyes are dead. Because Prince William playing rounders isnt really the funniest thing theyve ever seen.

A-Level students reassured that it's all bollocks 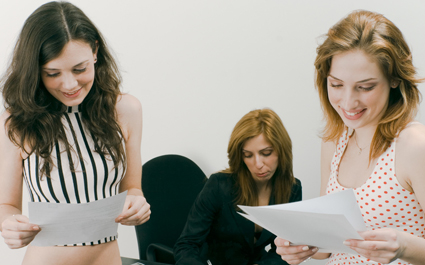 STUDENTS getting exam results have been reassured that even if they did less well than hoped, the whole thing is a load of bollocks.

Senior lecturer Tom Booker said: “It all seems like a big deal, especially if you’ve got aspirational middle class parents on your case.

“But whether you get into a good university or not, you aren’t going to learn very much. It’s just as pointless as school.

“The entire sum of human knowledge is on the internet anyway, if you’re really that interested.”

Booker confirmed that the main point of getting a degree was so that potential employers do not chuck your CV straight in the bin.

“But you can always lie about that stuff, it’s not like they’re going to check.”