THE Duchess of York has admitted to an ‘appalling lack of judgement’ after giving the impression that her former husband does something.

Sarah Ferguson told an undercover reporter from the News of the World that for Â£500,000 she could introduce him to Prince Andrew and that it would in some way be helpful.

She said: “In recent years I have found myself under increasing financial pressure, however that is no excuse for insinuating that a member of the Royal family has a point. I have been made to look incredibly stupid and naive.

“I want to make it clear that my former husband had no knowledge of my actions and would never, as far as I am aware, do anything.”

Constitutional expert, Denys Finch-Hatton, said: “It must have been very difficult for the journalist to keep a straight face. I can only assume he was posing as someone who had never heard of Prince Andrew.

“I’d imagine any normal human would probably have said something like ‘Prince Andrew? Are you sure? That can’t possibly be right’.”

He added: “Then again maybe one can make a career out of introducing someone to a group of legitimate businessmen from Kazakhstan.

“Or perhaps Â£500,000 is the going rate if you want to hitch a ride on a helicopter that’s going from the car park to the first tee at Wentworth.”

Prince Andrew said he had been ‘unaware’ of his wife’s meeting, adding: “I’m about 80 yards to the pin with a decent lie so I think I’ll try a little ‘bump and run’ with my new seven iron.

“This afternoon I shall have a bath.”

But experts stressed the latest scandal means the Prince’s ex-wife could now before forced to resign as both Duchess of York and Sarah Ferguson.

Denys Finch-Hatton said: “I suspect she’ll probably end up being called something like ‘Barbara Mabbot’ and selling toilet cleaning supplies to medium-sized businesses in the M4 corridor.”

Match Of The Day To Carry Blackpool Warning 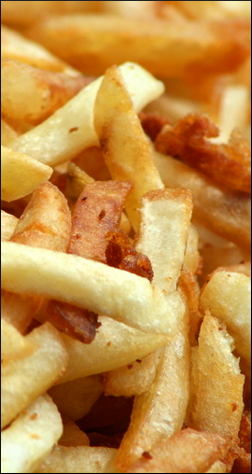 THE BBC is to warn Match Of The Day fans before showing scenes of a graphic Blackpool nature, it was confirmed last night.

Following Blackpool’s promotion to the Premier League, next season’s programmes will feature a message from Simon Bates, warning that some scenes may be unsuitable for those who visited the resort and spent the whole time scraping a thick, brown film from their skin while dodging used condoms and the drunk Glaswegians who had recently filled them.

BBC producer Martin Bishop said: “After last years’ Alan Pardew unpleasantness we must do all we can to avoid inflicting any fresh traumas on our mentally fragile audience.

“The last thing we want is somebody having a Vietnam-style flashback to a sticky, matted stag weekend involving a 36-hour karaoke session and a basket of deep fried skanks.”

Bishop said the corporation would also be forced to pixelate the face of Blackpool manager Ian Holloway what with it looking like the result of a toddler being handed a large egg and a marker pen.

But experts insist that television coverage will be vital to Blackpool’s ambitions to become Lancashire’s answer to Monte Carlo if the Riviera playground smelled constantly of burnt fat.

Julian Cook, professor of being beside the seaside at Reading University, said: “The average house price has already skyrocketed to almost 2000 Nectar points and Marks and Spencer is considering opening a store about 65 miles from the town centre.

“However, there is still a long way to go which means the only reason why anyone should visit Blackpool is if a raging forest fire or a battalion of armoured hell-hounds is pushing you inexorably toward the coast.”

Meanwhile the local council has made Holloway a freeman of the borough, which, under a 900 year-old by-law, gives him the right to wheelbarrow a drunk girl from Gateshead along the Golden Mile without having to clean up her droppings.