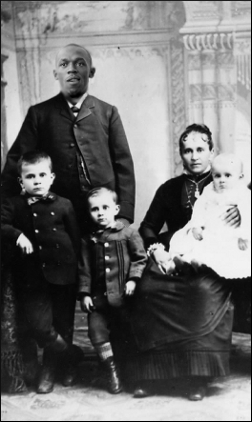 AN inquiry has been launched after the world record breaking sprinter Usain Bolt was spotted in a 135 year-old photograph.

Officials at the International Athletics Association believe Bolt may now be travelling so fast that he is opening up a hole in the space-time continuum every time he runs.

An IAA spokesman said: "Our suspicions were first raised by the long trails of flame on the track at the end of each race.

"And some of the other sprinters reported that Bolt seemed to have grown a beard in less than 10 seconds, while others said he suddenly smelled of paraffin and, occasionally, whale oil."

He added: "At last month's Helsinki Grand Prix he started the race in shorts and a vest but for some reason, by the time he had crossed the line he was wearing a tweed suit, a starched collar and a bowler hat.

"We think he may have a job and a family in 1874 and is able to rip a hole in the fabric of space-time, go back and spend months or even years with them, before ripping a hole at that end and then finishing the race so it looks to us as if nothing has happened."

Bolt's rival, the American sprinter Tyson Gay, said: "I have noticed how he is constantly surprised by iPods and TVs and cars as if he doesn't really spend very much time in this century.

"That, and the fact that he smokes a pipe and and is always carrying a fresh copy of the Pall Mall Gazette."

But Bolt dismissed the claims, adding: "The chances of me being a time traveller are about as likely as that foolish Mr Gladstone winning a second term as prime minister."