The Swedish-born mother-of-three has developed a sudden interest in the language and culture of Italy and has taken to greeting friends with 'bongiorno' and using the exclamation 'mamma mia!' up to 30 times a day.

She is also working on a new six-part cookery show for Channel Five. Producers say Ulrika's Italian Feast will be a "sensual odyssey that will make Nigella Lawson look like a fat plumber".

The spin-off cook book will be sold as a companion volume to her classic How to Get Into My Pants in Three Easy Steps.

Ulrika said: "All the ingredients are fresh, ripe and juicy. In no time at all you could be entering my underpants with ease."

The former presenter of Gladiators and Of Course I'm A Bloody Sex Addict also annouced that she was single again after her fiancee made an offensive comment about Italian mothers.

Jonsson said: "I love Italian mothers. They're the greatest people in the history of the world. I also love older, more sophisticated foreign men who wear designer spectacles and have their own goalkeeping coach." 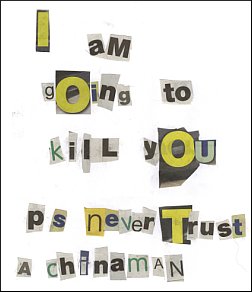 The unsigned letters, sent between 1992 and 1997, usually began with 'My dearest Diana' before predicting her death and alerting her to the dangers of the 'yellow peril'.

The inquest jury at the Royal Courts of Justice was shown more than 20 letters, some made from newspaper cuttings, others written in an untidy, child-like scrawl. Martin Bishop QC told the court: "At first, the source of these letters was a total mystery.

"Indeed, any normal reader would have been stumped but for the unprovoked racial slurs tagged on to the end."

Mr Bishop added: "I put it to you that there is only one man in this country who would have gone to such lengths to cast aspersions upon the Chinese."

One letter reads: "My dearest Diana, I am no marriage counsellor but that won't stop me from killing you." He added: "Never leave the room when drinking with an Oriental."

In another letter from the summer of 1997, Philip wrote: "I see you have taken to consorting with a brown man. P.S. What are those Chinese devils plotting now? Any ideas?"

Denys Finch-Hatton, a Royal expert, said: "The early to mid-nineties was very much the high point in the Duke of Edinburgh's China-hating phase.

"He's getting on a bit now so these days he makes do with hating the Arabs and the French."