World Smells Better Than At Any Time Since 1850

THIS year has been the best smelling since global smell records began, the United Nations confirmed last night.

Eight of the ten most fragrant years of all time have occurred since 1994, despite a worldwide increase in urine.

In the 500 years following the Black Death the global smell remained consistently awful, a bit like a pair of damp gym socks, rubbed in pork and left inside a sack.

The invention of nylon led to a temporary rise in mustiness during the 1930s, while the austere, post-war Britain of the 1950s smelled of nothing at all. The late 1960s saw a new wave of smells emanating from California which made everyone want to have sex with strangers.

Dr Tom Logan, research chief at the Institute of Smells, said: "Welcome to The Age of Oust!  It doesn't just mask odours, it kills the odour-causing bacteria in the air."

Dr Logan said Oust products would soon be built-in to every household appliance and that he had seen sketches of a scented candle that you strap to your chin.

He said: "Febreze is a freshener and an eradicator. Anyone who suggests otherwise is a stinking fascist. Febreze!"

Both experts agree that while 2007 has been a very good smelling year, there is mounting evidence that 2008 will stink like a toilet at a vegetarian music festival. 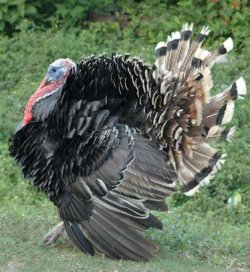 New research suggests that people who take their turkeys into the bath or shower over the festive season run the risk of infection and serious injury.

Dr Bill McKay, director of poultry at the National Bathing Institute, said: "It's very tempting, particularly at this time of year, to take a turkey into the bathroom.

"A few years ago I made the mistake of trying to have a bath with a 12 pound male. I still have the scars to prove it.

"If you really want to wash a turkey then take it into the back garden, tie it to a downpipe and set the hose on it."

Dr McKay added: "If you are absolutely desperate to bathe with a large fowl I would strongly recommend a plump, English goose. They are even-tempered and scrub-up nicely.

"But if that's a bit ambitious, you can always start out with a duck and work your way up."