World of Menschcraft takes place in a fantasy land ruled by the wisest and most beautiful queen imaginable, who is strong-minded and fair but not afraid to dress sexily if the mood is right.

While similar in format to existing role-playing games, Menschcraft has already been criticised for never allowing players to become as good as Queen Louise. For example, players may enter Menschitania’s weekly beauty contest, but it can only ever be won by the queen.

Online gaming addict Tom Logan said: Last week my party fought its way through a goblin-filled dungeon in search of a ‘magical book’ which turned out to be dreadful chick-lit.

Theres also a problem with level-grinding because you can earn thousands of points simply by sitting at a forge making statues of Queen Louise.

The games developers have released an expansion pack, Death of the Patriarchs, in which players must kill a group of blue-skinned orcs who fail to realise how talented Queen Louise is.

Tom Logan said: For some reason, the game rewards you with ‘wisdom points’ if you buy The Menschitania Times and read Queen Louise’s opinions on heels versus flats.

However I quite liked the mission where you collect vials of magic powder so that Queen Louise can give you a tedious lecture about drugs. 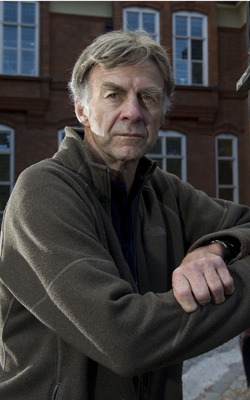 SIR Ranulph Fiennes has announced an expedition beyond the boundaries of eroticism.

A bout of frostbite caused Fiennes to question why he spends his pensionable years going to very cold places that contain only ice and penguins.

Fiennes said: “When you think about it, the Marquis de Sade has just the same pioneering spirit as Sir Edmund Hillary, but with regard to sexy stuff instead of climbing. And those big mountains are pretty phallic, let’s be honest.

“I thought, I’ve explored every hostile terrain known to man. But beyond a few mildly charged pillow fights at public school I’ve always stayed on the beaten track as far as physical love is concerned.”

He said: “I shall be attending as a ‘fabulous’ fox with giant foam rubber genitals. It’s all very new to me but it certainly makes a change from head-to-toe Gore-Tex.

“Transgressive clothing designer Jean-Paul Gaultier is to serve as a sexual sherpa, leading us fearlessly into the darkest of dark rooms.”