FANS of a radio station broadcasting birdsong have attacked plans to play urban-themed 'Tweethop' music in which some of Britain favourite species rap about killing the police.

Birdsong FM said 'Tweethop' and the more aggressive 'Chirp' would reflect the issues of modern avian life, including egg theft, gun crime and scoring high-grade skunk off some Bulgarian magpies.

Tom Logan, head of programming, said: "Acts like Public Chaffinch and Menace to the Nutsack are doing some really exciting things with their music – when they're not shooting each other in the face with semi-automatic weapons."

Public Chaffinch's controversial anthem Fuck Bill Oddie (Right in Da Ear) is one of the Chirp scene's biggest hits. The act features two chaffinches, a coal tit and a rare Barnacle Goose with a firearms conviction known as MC Tizer.

But many regular listeners are horrified by the changes. Martin Bishop, from Doncaster, said: "I like to listen to tits while making model boats in my shed.

"I've always found it very relaxing, until yesterday when I tuned-in to hear a sandpiper tweeting about his 'big ting' and repeatedly using the F word, the C word, and a word beginning with R which I was not familiar with."

Daphne Page, from Hatfield, added: "Not only is there profanity but every few minutes a wood pigeon goes 'shout out to HMP massive', which is intensely annoying.

"I shan't be listening again and if the RSPB want me to renew my subscription they can take it out of my big, creamy white ass, muthafukaz." 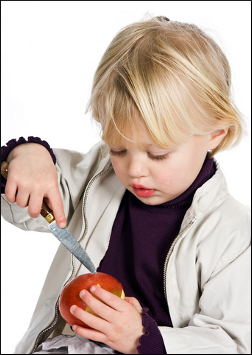 The lethal infants, too young to be prosecuted, can be carried in jacket pockets and are regularly used in gang fights.

The trend started in 2003, when a Streatham gang called 'Fuk-U-Honkee' made a shish-kebab out of four of their rivals after hurling a toddler wearing a souped-up Kaiser helmet.

This year saw the introduction of the fully-portable hunting infant, which can carry eight blades, a compass and an attachment for removing hoodies from the hooves of a police horse.

The flick-toddler is bred following trysts in Burger King car parks and is raised on a diet of Sunny Delight and an aggressively misguided sense of unjustified entitlement.

Aged four they are used only in minor disputes over turf rights as their underdeveloped biceps are unable to wield a machete for more than two or three minutes.

According to the police, by the age of nine they are carrying so many blades they look like titanium hedgehogs.

A Metropolitan Police spokesman said: "Once the youths reach the criminal age of responsibility, gangs dump them in waste ground and industrial estates. One orphanage in Deptford looks like a cross between Annie and Edward Scissorhands."

The Home Office has proposed a flick-toddler amnesty where the weapons would be handed into a police station before being melted down and turned into soap.