GORDON Brown has escalated the war on climate change after branding the plastic bag, 'the carrier of choice' for Al Qaeda and paedophiles.

The prime minister said Osama bin Laden insisted on 'double bagging' his groceries and that satellite pictures showed the outside of his cave was littered with discarder carriers. 'Kiddie fiddlers', he said, habitually used three.

Mr Brown also announced that from next April every household in Britain will have to bottle its own rectal emmissions in a bid to cut greenhouse gases by 64.6 per cent before July 14th 2053.

He said: "Methane expulsions are also the single biggest threat to our planet. Every time you let fly a polar bear grabs its chest."

Each household will be able to order a special fart bottle from one of the government's new Green Homes call centres, which will stay open 24 hours a day to tell people to turn off their lights and avoid unnecessary phone calls.

Each gas bottle will include a moulded plastic seat and an easy-to-operate valve. Its 40-litre capacity will  hold the gassy deposits of a family of four for a fortnight, or two days if they are vegetarian.

Mr Brown said: "The fart bottle will replace Strictly Come Dancing on Ice as the focal point for British family life. The family that farts together, stays together."

Full bottles will be taken to local authority Fart Banks where the gas will be removed safely and hygienically before being pumped into giant storage areas under the sea.

But the plans have angered residents in areas earmarked for the banks who say they will be living next door to a "ticking fart bomb".

Wayne Hayes, head of gas at the Institute of Digestion, warned: "A lighted Jeep driven into a heavily laden Fart Bank would make Nagasaki look like bonfire night." 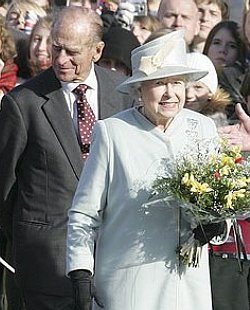 THE Queen has paid tribute to her husband as one of Britain's most accomplished post-war racists.

As the couple celebrate their diamond wedding anniversary Her Majesty unveiled a plaque at Runnymede listing 60 of Philip's favourite racial slurs.

The list was chosen after a public vote and suggestions from the Privy Council and the Association of Chief Police Officers.

As well as favourites such as 'jock', 'taff', 'mick', 'kraut' and 'wog', the list contains more elaborate insults including 'slanty-eyed little dog-eaters' and 'dago monkey-men'. The list is topped by 'fuzzy wuzzies'.

A Palace spokesman said: "Her Majesty wanted to pay a personal tribute to the way her husband has expanded the lexicon of intolerance these last 60 years."

During the ceremony the Queen told a favourite story from the couple's honeymoon in Malta when Prince Philip shook hands with the local mayor and asked loudly, 'are you people wops, dagoes, frogs or chinks?'.

Her Majesty also relived the famous incident during the couple's official visit to China when Prince Philip told prime minister Li Pung that he was, 'looking particularly yellow today'.

After the unveiling the couple was presented with a pair of commemorative shotguns and spent the rest of the afternoon wandering through a nearby housing estate shooting at cats.