PRESIDENT Bush has underlined his commitment to tackling climate change by unveiling the world's biggest car in Detroit.

It comes complete with KFC bucket holders and a chocolate-resistant coating on the dashboard.

The IceCap is powered by a 38 litre, V12 engine and achieves 400 yards to a gallon of petrol. The fuel tank is a 40ft trailer which is towed behind the vehicle.

The early promotional campaigns will be accompanied by the slogan "You can feel the water level rising".

The IceCap is the latest attempt by America to make a significant impact on climate change.

At the official launch in Detroit, President Bush pointed to the IceCap and said: "Big car. Good. America." 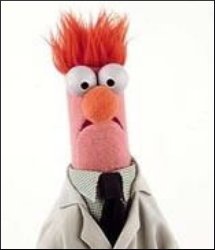 TRANSPORT minister Stewart Stevenson has become the first member of the Scottish Parliament to be inducted into the Muppet Hall of Fame.

The MSP for Banff and Buchan began his career as a laboratory assistant to Dr Bunsen Honeydew in the late 1970s.

During his time at Muppet Labs, Stevenson was shrunk, cloned, deflated, made invisible and blown up.

On one memorable occasion his eyes lit up when he was electrocuted.

Dr Honeydew said: "Stewart was my faithful assistant for many years. His bravery, his curiosity and his powers of recovery are all legendary.

"Though I have to say I am deeply disturbed to learn he has been put in charge of an entire transport system. You may live to regret that."

Stevenson's talents extend beyond the world of science and he is known for an impressive Little Richard impersonation and his ability to 'beatbox'.

He has also performed a very moving version of Feelings and a spirited rendition of Danny Boy, accompanied by his close friends the Swedish Chef and Animal.