C02 emissions to be stored in your spare room

THE spare room you’ve been meaning to turn into an office will instead be used to store carbon dioxide, it has emerged.

In a radical solution to climate change, the government intends to house CO2 in the nation’s worthless, junk-strewn spare rooms.

The CO2 would be processed into a non-gaseous, liquid state, then secretly pumped into households’ unused rooms while the occupants are at work, relying on the likelihood that no-one will ever open the door and let it all out.

“However, that little room at the top of your stairs with the semi-dismantled mountain bike and the clothes horse in it would be just perfect.”

Carbon capture technology has been mooted for years, but this is the first time it has been suggested for pointless domestic areas.

Other possible locations for excess carbon dioxide include garden sheds, Dad’s Army VHS video boxes, or in kitchen drawers that that have become inexplicably filled with hundreds of Sainsburys’ bags to the point where they no longer open.

Dr Cook said: “We’re not suggesting that all the world’s CO2 ends up in people’s homes. Just a sizeable proportion of it.”

Moths team up with James Herbert 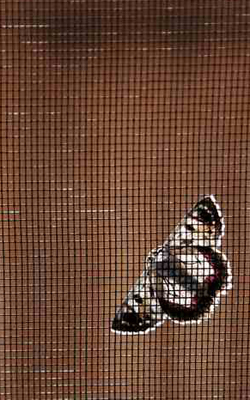 HORROR writer James Herbert has inked a deal with moths to write a horrifying account of their battle with mankind.

The clothes-eating insects have sold the novelisation rights to their species to the author of The Rats for an undisclosed six-figure sum.

Moth Nathan Muir said: “We will be working closely with James to bring the full horror of our murderous rampage to blood-soaked life. He really likes my idea that we lay our eggs in people’s hair and then little moths fly out of their noses.

“The front cover will be a really cool picture of a moth with skull-shaped patterns on its wings, all covered in blood. The strapline will be ‘They creep…they crawl…they fly…’ in big embossed letters under the title ‘MOTHS’.”

But fellow moth Emma Bradford said: “That strapline doesn’t even make sense. Creeping and crawling are effectively the same thing.

“Frankly I think this whole thing is an awful, larvae-brained idea. We should be working with a credible writer like Hilary Mantel on a sort of insect historical saga.

James Herbert’s spokesman said: “James is really excited about moths, they genuinely freak him out.

“He promises his younger fanbase that there will be plenty of gratuitous sex scenes using words like ‘cupping.”