TANK tops, everyday racial abuse and Larry Grayson could all help tackle climate change, according to a report urging a return to 1970s lifestyles.

New research by the Institute for Studies shows the adoption of low aspirations and cheap foreign stereotypes could give Britain a carbon footprint not seen since 1976.

Professor Henry Brubaker said: "A PS3 consumes enough fossil fuel in one hour to keep a game of Simon going for 15 days, by which point we think it would sound like Rick Wakeman having a stroke."

Professor Brubaker added; "A fume-belching Austin Allegro taking a hollow-cheeked family to a shit-ridden campsite in Whitby is far greener than ramming four fat arses into a plane and then flinging it towards a vomit-soaked fortnight in Orlando.

"Everyone was much thinner compared to now. Look at Keith Chegwin. Thin as a whip on Swap Shop, but now he takes up three sections of a revolving door. We're recommending a dietary shift towards potato waffles and Texan bars."

The government insisted it was already adopting 1970s measures to combat CO2 emissions including a grinding recession and a violent, bigoted police force which keeps everyone cowering indoors for fear of getting a riot shield across the trachea.

A spokesman added: "All we need is a clapped-out Labour prime minister, a resurgent IRA and a Star Trek film. Wait a minute…"

Budget To Include &#163;1 Billion For New Squats 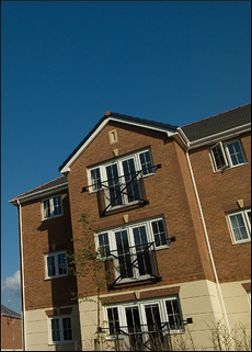 TOMORROW'S Budget is expected to include a £1 billion programme to build thousands of houses that no-one can afford to buy.

Treasury sources say the initiative will not only look good for a couple of days, but could eventually provide a dry, energy-efficient shelter for families to return to after foraging through skips for food.

A senior official said: "We would urge people to wait until the houses are half-finished before they start squatting in them.

"And of course we do expect hundreds to grab their sleeping bags and queue overnight for the chance to squat in one of the luxuriously appointed show homes with toilets and glass in the windows."

The official added; "The only people who will be able to afford one of the new homes are the builders who have just been paid to build them. But some of the builders may choose to move house thereby freeing up their old house for squatting."

Margaret Gerving, an unemployed unit from Darlington, said: "I've always dreamed of squatting in a brand new house. But I don't think it'll change me. I'll still spend most of my time swiping at the bailiffs with a large metal pole."

Experts say the housing programme is the latest in a series of leaked Budget initiatives that won't make the slightest difference to anything.

Employment consultant Tom Logan said: "I like the one about creating thousands of new jobs by building huge offshore wind farms that will be made in Portugal and controlled by a computer."