Cat goes outside to commit atrocities

AN ADORABLE cat turns into a sadistic psychopath the second she leaves the house, it has been revealed.

Two-year-old Lemon is highly regarded amongst her human family for her adorable miaow, cartoonish features and penchant for belly rubs. Outside, however, Lemon’s reputation is significantly less glowing.

“I’ve been trying to get my life back on track, but I live in constant fear that she’ll come to finish me off. Last week, she killed a pigeon and then left its head outside my den. I think it was a warning.

“Just when I thought the nightmares had stopped.”

Lemon’s owner Nikki Hollis,said: “She doesn’t mean it, it’s just instinct, isn’t it, precious? Who’s a fearsome hunter? You are. Yes, YOU are.”

Lemon said: “I meant every second of it and I’d do it again.” 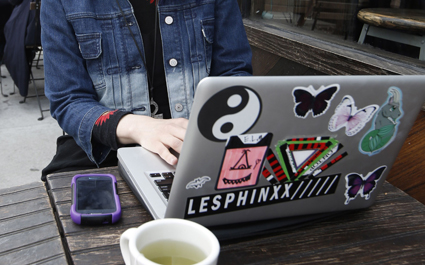 A MAN who covered up the logo on his laptop is definitely sticking it to the man, he has confirmed.

Tom Booker believes that the sticker marks him out as different from other Mac-using ‘sheeple’, because he is refusing to advertise for the corporation, even though the glowing apple shape still clearly shines through.

Booker said: “I see myself as an anti-capitalist anarchist, so there’s no way I’m going to act like a walking billboard for massive, faceless companies like all the other people in my local Starbucks.

“By covering up the logo, I also secretly hope people will think I am a shadowy, anti-establishment hacker even though the closest I’ve ever got to that is figuring out that my mum’s Netflix password is our dog’s name.

“It has been suggested to me that the best way to protest against the creeping influence of multinational corporations into every aspect of our lives would be to get rid of the laptop altogether and live off grid.

“But I can’t do that. How would I keep in touch with my anarchist friends on Facebook?”