Cats wondering why they didn't try teamwork before

A GROUP of cats has belatedly discovered it is far easier to get things done if you work as a team.

Cats from a street in Nuneaton have reportied huge efficiency gains after cooperating on feline activities including catching mice, damaging furniture and shitting in other people’s gardens.

Black and white cat Wayne Hayes said: “We’ve worked out a system where some of us flush out the mice and the others form a perimeter to stop them escaping. We caught 53 today.

“I don’t know why we didn’t do this years ago. The Scots terrier down the road used to scare the shit out of me but he soon stops acting the hardman when 30 of us turn up.”

Persian cat Susan Traherne said: “Normally I get shooed away before I can defecate in Mrs Norcott’s rockery, but with Spats and Ziggy creating a diversion it’s a piece of piss.

“I have to go now because I’m late for a strategy meeting about ambushing magpies.”

I'm not leaving until you've bought some missiles, May tells Africa 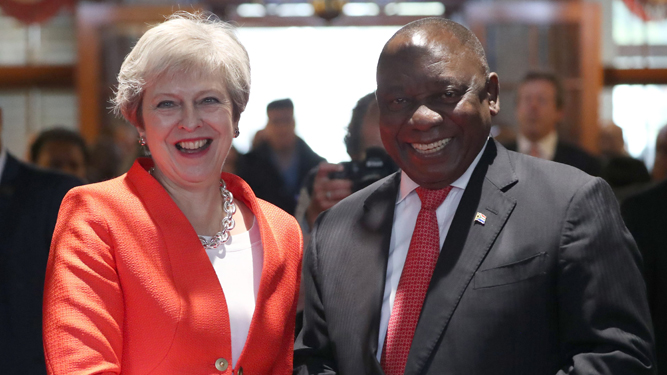 THERESA May has vowed not to leave Africa until everyone has bought at least one British missile.

The prime minister feels her dreary personality and toe-curling dancing are a powerful incentive for Africans to buy high-tech weapons they have no use for.

May said: “This is the start of a new era of cooperation between Britain and Africa in which they buy all our warmongering products or my visit will go on indefinitely.

“The idea that they don’t need them is nonsense. If you’re a subsistence farmer there’s nothing like a laser-guided Brimstone missile to stop a leopard eating your goat.

“Villages can club together to buy a Tornado GR4. In fact they’ll have to, or I’ll be there doing my weird little dance like a robot starting physiotherapy.”

South African president Cyril Ramaphosa said: “Christ I was desperate for her to leave, so I bought a load of air-to-air missiles just to stop the stories about walking holidays.

“Fuck knows what we’ll do with them. I suppose we can use them to sort out Johannesburg’s pigeon problem, but it doesn’t seem very cost-effective.”

Tomorrow May will move on to Kenya where the RAF will demonstrate using a BL755 cluster bomb to take out a hippo.