Climate change sceptic is fine with all other science

A DIEHARD global warming sceptic is happy to believe in all the other types of science, it has emerged.

Retired accountant Norman Steele believes climate change is a lie, yet fully accepts other types of science such as physics, medicine and the various technologies that enable him to fly to Spain on holiday.

Wife Emma said: “I’ve never seen him trying to disprove chemistry or claim Einstein was just into relativity for the money.

“He spends hours on the internet finding obscure studies that seem to contradict global warming, but he’s perfectly happy to watch our TV without incontrovertible evidence that it works from the scientists at Samsung.

“And when he went into hospital for an operation recently he didn’t accuse the doctors of being part of a conspiracy to make money out of ingrowing toenails.”

She added: “Norman must really be interested in climate science though, because if you wasted your life studying temperature graphs just so you could moan about it on the internet, that would make you a total fucking arse.”

Idiot band just in it for the music 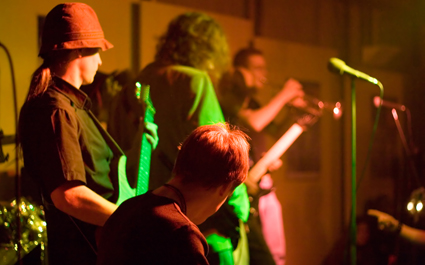 SOME stupid teenagers have formed a band with no clear business plan or marketing strategy.

17-year-old Tom Logan and his three friends gather in his parents’ garage to play music that is not even targeted at a particular demographic. The band also does not have muscular bodies, backing dancers or a professionally-designed logo that can be printed on a range of merchandise.

Logan’s father Brian said: “I’ve tried sitting them down in front of The X Factor and saying ‘this is how music works’, but they just say it’s ‘fucking shit’. What can you do with kids like that?

“They just plug in their instruments and playing random things for their own amusement, as if music isn’t just another extension of the modern corporate world.

“They don’t have any career plan and one of their songs has ‘ballbags’ in the title which immediately excludes it from Radio One airplay. It’s annoying as they could be fairly good-looking if they took a course of prescription acne drugs.

“Maybe they just need to mature a bit and then become a quartet of sexy commercial opera singers.”

However Tom Logan said: “Our band is called either Maniac Dog Turd or 16-Bit Psycho Cops, depending on the day of the week, and our dream is to live in a party squat full of overflowing ashtrays.”