THE Earth can be saved from the damaging effects of climate change with a series of contraptions built by Wilf Lunn, it has been claimed.

A report by the Royal Society said Lunn's 20ft-long egg-boiling machines could be adapted to capture carbon dioxide from the atmosphere and then use it to boil millions of eggs.

A spokesman said: "We had almost given up hope on finding practical applications for geo-engineering when Professor Brubaker suggested that man with the crazy moustache from Vision On.

"We now believe Mr Lunn's theory of contraptionistics can be used to construct gigantic, Earth-saving machines, while at the same time ensuring an endless supply of delicious egg mayonnaise for the drought stricken regions of sub-Saharan Africa."

Early ideas include a series of vast mirrors in space to reflect solar rays, 50ft tall CO2 scrubbers to clean the atmosphere and a machine that prevents former US vice-president Al Gore flying half way across the world in a private jet so he can show his boring film to some hippies.

To promote their new report the Royal Society is to stage an exhibition featuring children's drawings of Earth-saving devices which members of the public can view while listening to some lovely guitar music from The Deer Hunter.

Wilf Lunn said last night: "I shall need a ping-bong ball, a candle, two cheese graters and 28ft of copper wire. And an egg."

Bill McKay, an environmentalist from Peterborough, welcomed the report, adding: "My wife is an absolutely colossal scrubber, but unfortunately she does tend to make things even dirtier."

Prison Nicer Than Hospital Apart From All The Sodomy, Say Experts 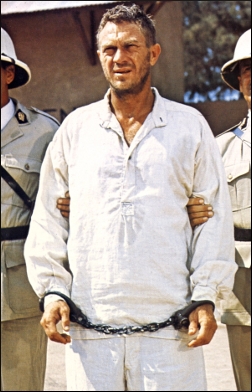 PRISON life is preferable to hospital apart from the persistent knife-point sodomy and being shanked for an ounce of tobacco, according to a major new report.

Researchers at Bournemouth University said hospital food in particular was below prison standard with those patients who were able to sit up claiming it 'tasted a bit MRSA-ish'.

Nutritionist Dr Roy Hobbs said: "Prison food is designed specifically to deliver the key requirements of your average 22-stone psychopath. Unless, of course, you're a sex offender in which case it's mainly sandwiches made from broken glass and pubes.

"It may surprise some people that prison food is better than hospital food, but it's very important that prisoners are kept in peak condition so that those who want to at least have a chance of fighting off the 22-stone psychopath and his powerfully determined erection."

Last night patients at Knutsford General Hospital staged a violent protest in the hope of arrest, imprisonment and finally some soup that would not make them cry.

Charlie Reeves, an 82 year old hernia patient, said: "Every meal looked like it had died of a tragic wasting disease. One sausage coughed at me when I stuck a fork in it.”

"It's not really what you need when you're having a lump removed from a slightly wider lump."

Dr Hobbs added: "I suppose there comes a point in the history of all great civilisations when its citizens realise they would actually be better off in jail. Britain is now writing that glorious chapter.

"Now If you'll excuse me, this large bag of shit is not going to push itself through Gillian McKeith's letterbox."