I oppose global catastrophe more than anyone, but by making me late for work Extinction Rebellion have gone too far

YOU won’t find anyone more opposed to climate change than me. I recycle, I haven’t flown since 2019, and my next car will be electric.

But when the terrorists of Extinction Rebellion cause me to be 40 minutes late to work, earning me a verbal reprimand from my boss, then I think we can all agree they have to be stopped.

A global temperature increase of 1.5ºC by 2040 means extreme weather events around the world. Melting icecaps will destroy thousands of British homes. In a century, human life could be unsustainable. But I’ve got to work until bloody 7pm to make up the time now.

How is it helping the climate catastrophe for me to be in the boss’s office having a strip torn off me this morning? Perhaps Greta Thunberg would like to step in and get my bollocking?

To clear any doubt, I am a supporter of Extinction Rebellion. We are in an emergency. The world is on fire. I fully back any action they take in New York, in Paris, in Milan or Manchester. We have no other option.

But if they could assume London’s got the point – we’re all pretty environmental, I get the train in, I’d work from home but it’s not that kind of job – and lay off for a bit, then we reduce the danger of me being called into a meeting and finding that smug cow from HR already there.

Come on. I’ve got a reusable coffee cup. We’re planning to get solar panels installed when we’ve enough savings. That’s never going to happen if you bastards keep causing gridlock.

Enough is enough. For the planet, yes, but also for me personally in this specific situation where I’m in line for a written warning. So do me a favour and f**k off?

Are you drinking enough red wine in the morning? 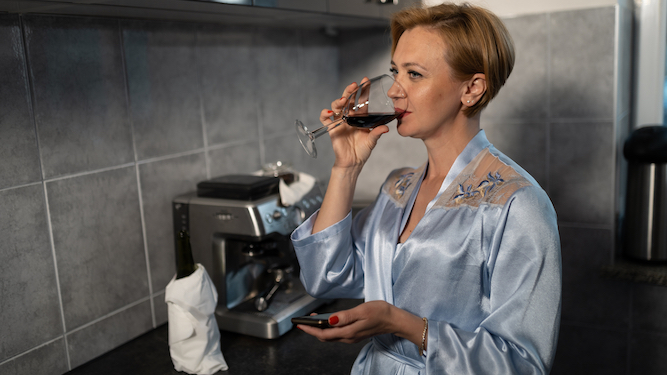 DRINKING three glasses of red wine a week is good for your health, according to new research. Functioning alcoholic Donna Sheridan gives her misinterpretation:

You know when you feel like shit in the morning? That cannot be good for you. Take the edge off a busy day with a large glass of red left to breathe overnight on your bedside table. You’ll feel more relaxed and you won’t be as impatient with the kids.

Drink driving is illegal, but because red wine is officially medicine then it’s exempt. Sip a big glass as you go and the stress of the traffic will melt away, lowering your blood pressure and allowing you to go faster so the kids get there sooner and learn more.

Zoom meetings only really involve sitting still while not looking obviously drunk. A 250ml top-up Merlot will make you passionate to the point of incoherence about marketing bullshit. You’ll seem quite the professional.

It’s important to eat properly at lunchtime to avoid a ‘sugar crash’ in the afternoon. Luckily red wine is full of carbohydrates, so finish off the bottle and open a new one. You won’t care about what you actually have for lunch either. An avocado with the skin still on is organic, nutritious and goes down smoothly.

Have a productive afternoon

Afternoons can be quite boring. A nice Rioja is the perfect accompaniment to domestic chores, probably because of the tannins. Remember to reply to work emails in between watching The New Avengers on ITV4 and snoozing on the sofa.

They’re making some fuss about not being picked up, but once your kids are home and fed it’s time for a large Malbec and some quality parenting. The wine will unleash your creativity as you invent a soothing, slurred story about Nobby the Goblin who lives in Goblinland. Then once they’re tucked up? It’s wine o’clock!