Oil Well Capped Before Everyone Realises It's Their Fault

THE ruptured oil pipe in the Gulf of Mexico has been capped just minutes before everyone realised it had all been their fault.

As the White House stepped up its attack on BP, experts stressed the real blame obviously lies with anyone who drives a motor car, uses medicine or wears tights.

Professor Henry Brubaker, of the Institute for Studies, said: “Oil companies aren’t pumping this stuff just so they can have it sitting around in buckets under their stairs.

“They pump it because you want it. And what’s more, you don’t particularly want to pay for it, thereby ensuring it gets pumped in a dangerous and haphazard way – much like a Friday night skank on a playground swing.

“So whenever you feel tempted to have a go at BP, what you should do instead is either sell your car and any objects you own which contain plastic, or shut your stupid fucking face.”

Professor Brubaker explained that oil is used in some form by virtually every human being on the planet and that even George Monbiot is currently writing one of his absurdly childish articles on a laptop computer that could not possibly exist without it.

He added: “For instance, the stockings I’m wearing today are made of synthetic polymers, an essential ingredient of which is oil very similar to the kind that is currently choking guillemots just off the coast of Louisiana.

“I should point out however that my suspender belt is pure silk. And yes, it feels fantastic against my thighs.” 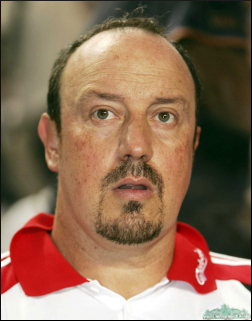 CELEBRATIONS marking the departure of Rafael Benitez have been
spotted by astronauts on board the International Space Station.

Crew members said the Liverpool street parties appeared as a spot of brightly-coloured euphoria as the city took on the appearance of a giant smiley face.

Fan Charlie Reeves said: “The birth of my daughter, my wedding, committing my first ever burglary are all now reduced to ‘mere occurrences’.

“And all it took was Â£3m. Those three little millions will spread so much happiness that Children in Need will seem like a Swedish film about a kitten that dies in a funeral parlour.”

Benitez’s reign as Liverpool manager ended as it began, with the club languishing in the league and the Spaniard riding around on a camel telling everybody he was the King of Narnia.

His personality quirks, such as insisting the groundsman refer to him as ‘Mr Cheeks’ and spending every Thursday leaping into the air to try and grab the sun, had been tolerated by the board as they realised no real football manager would want to live in Liverpool.

The search is now on for Benitez’s replacement, but club director Christian Purslow admitted it would be difficult to find somebody with the same determination, ambition and collection of Action Man figures dressed up as members of Genesis.

Fan Wayne Hayes said he planned to celebrate all day, adding: “Don’t tell anyone I’ve been sprinting down Church Street with my mate on my shoulders, will you?

“I’ll be getting drunk for the foreseeable future and I’m going to need all the incapacity benefit I can get my thieving little hands on.”