LOCAL authority recycling centres across the UK are to offer a drop-off service for old or faulty wives.

The government is to fund the £25 million scheme after a three-fold increase in wife-tipping since 1997.

Environment secretary Hilary Benn said: "People are sick of the sight of wives dumped by the side of the road.

"They are unsightly and often hazardous. Many of them end up being taken away by 'travelling people' who then try to sell them at car boot sales."

"Britain should be proud of its countryside rather than littering it with out-of-date wives."

The wife-banks will be installed in major towns and cities and will hold up to 30 wives at a time.

All of the disused wives will be refurbished or broken down for parts with many being exported to the developing world.

Mr Benn added: "A well-built British wife that has been kept clean can last for 30 or even 40 years."

Douglas Alexander Gets Three As And Two Bs 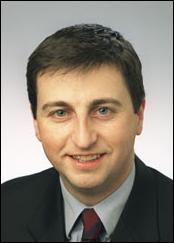 DOUGLAS Alexander, the international development secretary, is celebrating an impressive set of exam scores although he had to wait an extra day to get them after problems with a new online results system.

The minister, a close ally of Prime Minister Gordon Brown, was awarded three A grades and two Bs under the Scottish Highers system.

Alexander got As in English, Maths and French and Bs in Physics and Chemistry. He had hoped to learn his results earlier in the week using the new internet service but forgot his log-on details and so had to wait for notification to arrive in the post.

He said: "I worked really hard for this. My dungeons and dragons career has suffered and my realm points have fallen to less than 8000, but it has all been worth it.

"I'm so grateful to my teachers, my family and friends and my civil service team here at the Department for International Development who worked with me on Catcher in the Rye and some of the trickier French verbs. Edinburgh University here I come!"

Alexander has received letters of congratulation from more than 20 Commonwealth prime ministers and the President of the World Bank.

UN Secretary General Ban Ki Moon added: "Douglas is a fine, hard-working boy. I am sure he will make many friends at university."

Alexander plans to spend the rest of the summer visiting his pen pal in Bulgaria before beginning his degree in Being a Creepy Little Shit.