Reintroduction of wolves 'should start in London'

PACKS of wolves should be reintroduced to London to curb unmanageable population growth, experts have claimed.

The wolves, who last ran wild in the capital in the eighth century, will be prepared by training them in a dark grey maze and giving them a taste for human flesh.

“The wolves, which are adult greys and can easily take down a full-grown man who has a latte in one hand and a laptop in the other.

“At first they’ll pick off the weak, the slow, and anyone who tries to livestream them on social media, but as their numbers and confidence grow we’re hoping nobody will be safe.

“Within six months they should have reduced the human population down to a more manageable level, as well as hugely cutting emissions and forcing the cancellation of Made In Chelsea.

“It’s okay, because if nature meant you to survive you’ll be fine.”

The news has boosted rent and property prices in the city by 12 per cent, because that is how London works.

How to shave seconds off your commute by being a rude, pushy arsehole 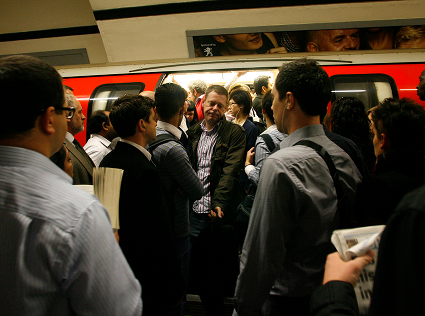 SO you’re walking through a train station and someone is coming in the opposite direction and headed right for you.

The human thing would be for you both to split difference so you don’t collide. But you’re not human you’re a timelord. You are the master of time. Stay on course. This is a game of chicken and you are going to win.

Now, imagine you’re at the platform and a train has arrived. People are lining up either side of the doors. Ignore politeness and basic physics by standing in front of the doors like a psychopath. Sure, this makes everything slower as you’re in the way of people getting off the train, but this isn’t about being literally quicker, it’s about creating a quicker ‘vibe’.

You’ve stepped onto the train, there’s space to move into, but stay close to the doors so that you can get off quickly at your stop. Don’t move, even if it stops someone else from being able to get on. If you start to feel guilty just tell yourself “Their journey is not my journey”.

Whatever you do, don’t take your rucksack off. And try to use as much space as physically possible, really stretch out. But how will that make you faster? Well it’ll piss everyone off, increasing the stress hormones in their bloodstream and in turn slowing their reactions. And if they’re slower, then what are you?