A MAJORITY of Scots are backing a total reliance on fossil fuels in a bid to deliver up to three months of t-shirt weather every year.

According to research by Dundee University, most Scots believe they have been let down by the first phase of global warming and want environmental groups like Greenpeace to, "shut their holes".

More than 70% would like to see wind farms demolished and replaced by gigantic machines that do nothing but emit carbon dioxide and methane, while 65% are calling for a moratorium on trees.

The survey also found a large majority want the Scottish Executive to stop investing in wave power and instead use the money to buy everyone a Range Rover.

Climatologist Bill McKay said: "It seems most Scots would happily accept rising sea levels, crop failures and forest fires if it meant a summer that lasted for more than 12 hours."

He added: "There are a number of things you can do such as washing your clothes three or four times a day or using 'mute' instead of the 'off' button on your TV.

"You may also want to picket railway stations or throw manure at people who use the bus." 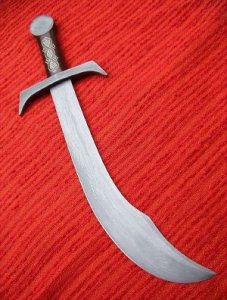 Mohammad Al Inseini, a spokesman for the Iranian government, said the Queen had taken up to three goes with her sword during recent ceremonies – and still failed to even draw blood.

He described the scenes as "shocking and barbaric" and said Iran had a number of well-trained professionals who could deal with the Satanic Verses author "in a oner".

Mr Al Inseini said: "Your Queen is a fine old lady who knows how to strangle a pheasant. There is no shame in her passing the sword to a younger man."

He said the Iranian government would happily supply its own top ceremonial swordsman, Al-Bert Pierrepoint, for the occasion.

"We promise you that with Al-Bert in charge Rushdie's knighthood will be conferred upon him swiftly and humanely," he said.

Mr Inseini said Iran would welcome the author to Tehran for a mass outdoor ceremony, but could also send its sword specialist to Buckingham Palace if that was easier.

Ejit Ul-Haq, editor of the Islamabad-based magazine Executions and Executioners, said that Pierrepoint was one of Iran’s top swordsmen with a good eye, a firm grip, and a sharp blade.

"Al-Bert knows exactly what to do when someone kneels before him, and is very used to performing in front of crowds," he said. "He also has a huge chopper."