LONGING for the simpler days of bell-bottom trousers, disco and good Star Wars films? Remind yourself how bad things actually were in the 70s with these godforsaken meals.

The culinary equivalent of freezing Han Solo in carbonite. For a whole decade people pushed the boundaries of good taste to the limits by sealing salads, eggs and entire fish in a jelly made of meat. It’s our public duty to make sure we never repeat this dark chapter of our history.

Ham and banana hollandaise
Even in the throes of bizarre food cravings, a pregnant woman would never dream of something as deranged as bananas wrapped in boiled ham and glazed with mustard and cream. We like to convince ourselves that we’re a developed society, but the invention of this dish should serve as a reminder of how uncivilised we really are.

Fish trying to look fun
Decorating a dead fish with broccoli florets and slices of cucumber doesn’t transform it into a cheerful character that deserves its own Disney film. Also deserving a mention is the 70s trend of thinking it’s a good idea to turn fish into a mousse. Serve fish in unrecognisable breaded finger form or don’t bother.

Spam cupcakes
There’s a reason you don’t see amateur bakers whip up cupcakes made of canned pork on Bake Off and that’s because the name alone is enough to turn your stomach. Prue and Paul would be vomiting beneath a gingham-checked table cloth before they’d finished the first mouthful.

Anything with prawns
Prawns are the biggest culinary casualty of the 70s. Putting some shrimps in a fancy glass and covering them with tomato sauce and mayonnaise is an undeniably classy idea, but everyone overdid it and now it can only be consumed with a large side serving of irony. 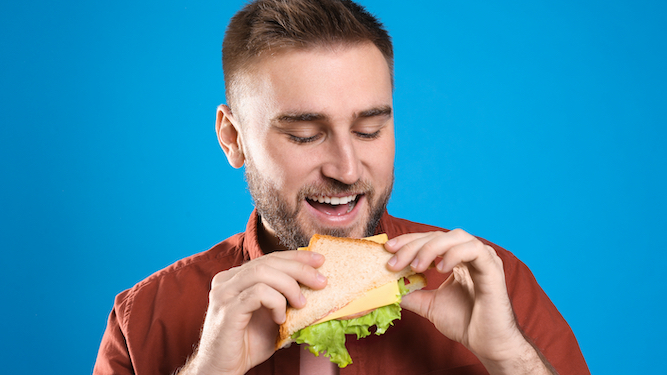 AN unbearable man is referring to his hastily thrown together middle of the day meal as his ‘lunch game’.

Jack Browne enjoys talking up all the mundane parts of his life, from the ‘RSI-destroying set-up’ in the spare room where he works, to the strength of his immune system thanks to his ‘elite cold water shock therapy’ morning showers.

Browne said: “I like to keep on top of my lunch game, whether it’s throwing in some new pickle or surprising myself with a smear of hot sauce. The way I play the lunch game, it’s never just a cheese sandwich.

“Working from home is no excuse not to be a total player when it comes to supercharging my nutritional intake, and innovation is at the heart of everything I do.”

Browne’s colleague, Lauren Hewitt, commented: “I’ve never known anyone get so much mileage from talking about cheddar. I think he misses boring people about his lunch in the office.

“Why can’t he do what every other twat does and set up an Instagram where he can talk about everything he shoves in his gob to people who give a shit?”