Fish ask pescatarians what the f**k their deal is

FISH have demanded to know why pescatarians are uncomfortable eating all other animals but fine with chewing up and swallowing their dead flesh.

The water-dwelling creatures expressed bewilderment that some humans were ethically opposed to eating grubby farm animals that live in their own shit, but not to consuming the beautiful wonders of the ocean.

Skipjack tuna Nikki Hollis said: “Is it because we don’t have legs? Just try putting one of those fleshy bone-bags called cows into our territory and getting it to race away from a shark. Then we’ll see how much legs help you.

“Or maybe it’s because they don’t think we’re as interesting and clever as land animals, even though I’ve seen sea slugs with more brains than sheep. And apparently my thousands of gelatinous spawns aren’t as cute as a baby piglet. It’s discriminatory.”

Pescatarian Francesca Johnson said: “My moral standpoint is that I won’t eat something I couldn’t kill myself. Fish are much less intelligent than me and also quite small. I reckon I could easily end one with my bare hands.”

Nikki Hollis added: “Has she seen how big a tuna is? We’re f**king massive. Come and have a go if you think you’re hard enough.”

Kirstie Allsopp vs Nadine Dorries: Whose side are you grudgingly on? 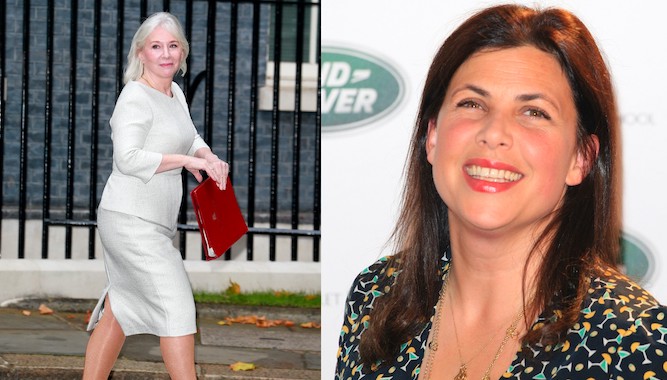 THE privatisation of Channel 4 has led to harsh words between Kirstie Allsopp and the culture secretary. Which of these two f**king irritating people do you reluctantly support?

Who talks the most bullshit?

Kirstie has been unable to resist spouting crap on a variety of subjects, including those working from home during a deadly virus, the f**king malingerers, and young people who apparently just need to give up Netflix and they’ll be homeowners.

However her output is nothing compared to Nadine’s years of idiotic tweeting, laying into Muslims, gay marriage (‘I’ve never met a gay couple that wants to marry’) and this weird comment: ‘Apparently I’m racist because I think Chuck Umunna looks like Chris Eubank. What would I be if I said he looked like someone who was white??’

Who do you support on privatising Channel 4?

On the one hand, Channel 4 loves titillating crap like Naked Attraction. Those us with long memories will remember horrors like the ‘real people’ comedy show Kookyville, which made you want to kill yourself to make the embarrassment stop. So in a roundabout way, Dorries may have a point.

On the other hand, Kirstie is right to defend Channel 4’s often brilliant output: Dispatches, Father Ted and a host of other comedies, and films like My Beautiful Laundrette. Even Brookside was streets ahead of the other tired soaps. Oh and it makes the only news show that doesn’t suck up to the Tories and Brexit, in a weird coincidence.

Who’s most clueless about the issue?

Allsopp has claimed that Mrs Thatcher would be spinning in her grave over selling Channel 4. This is unlikely as Thatch was infatuated with the super-efficient, price-lowering private sector – how times change – and would have wished the SAS could take out the traitor Jon Snow.

However, again Nadine proves a formidable opponent when it comes to stupidity. She didn’t actually know that Channel 4 wasn’t publicly-funded. She also claimed privatisation would help it compete with streaming services, although in fairness to ‘Mad Nad’ that’s probably just a lie to distract from the Tories’ vendetta against dangerous leftie Baader-Meinhof types like Cathy Newman.

Who’s had the most annoying career?

With the 28 billion or so episodes of Location, Location, Location, Kirstie is responsible for fuelling Britain’s tedious, deranged obsession with property. They should really have just called it Look At My Really Nice House And Weep You Povs in Rented Shitholes.

Nadine is annoying, but strangely compelling. Her tearful tribute to journalists was so fake it made you question any democracy that could elect deceitful snakes like her. Also everyone enjoyed her eating an ostrich anus, although that was more based on hating her. It would have been even more popular if instead she’d fallen into a wood chipper.

On balance, Nadine is far more irritating than Kirstie, and that’s quite an achievement. Also you know the worst Kirstie will do is more bloody house programmes and twee Christmas handicrafts. However Nadine gives every impression of being someone who’d put her opponents in a gulag while claiming she just wanted them to get more exercise.