Five food cupboard staples you can't eat yourself to sleep without

SLEEPING can be tricky, especiallly when you get up late and do nothing all day. So if you need to eat to the point of passing out like a milk-drunk baby, try these:

Stodgy cereals aren’t just for breakfast. Delicious and bloating, they’ll overwhelm your digestive system until you sink into a slumber so deep you’ll only wake up when the fibre has made its way through your system and is angrily crying for release.

Cheese sits like a brick in your gut, ideal if you’re looking to settle in for the night. Cheddar is effective when eaten in block form like a lard sandwich. Brie also slides down a treat and, when soft, doubles as a bedtime drink.

Potato, corn or maize crisps are both highly addictive and deeply unsatisfying, so when you’re looking to drift off more really is more. Try spicy seasonings for extra-fitful sleep, or meat flavourings if you want to wake up feeling like you passed out face-down on a kebab.

Essential as part of the sweet-savoury-sweet rollercoaster that inevitably leads to the land of nod, anyone who is serious about passing out mid-chew should have so many biscuits that they have their own cupboard.

Finally, from the humble slice to the mighty loaf, bread is nature’s sedative. Enjoy it with the sugar and/or fat-laden spreads that induce the most shame in those last moments before you black out. Then do it all again tomorrow. 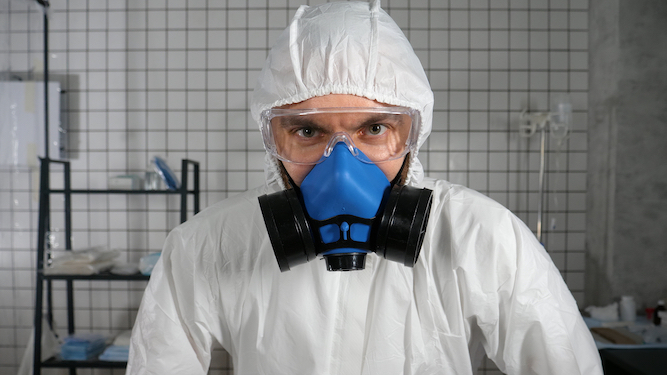 The five levels of the COVID-19 alert system are very clear, stay still when you look at them, and are not constantly coming toward you but never getting closer. F**k. Can anyone else see that?

At level four, which we remain at in theory, everyone should stay home but we’re not doing that because reality in itself is just a theory, this isn’t my arm, and Boris doesn’t want to.

Instead we behave as if level three, except we’re opening non-essential shops in two weeks like level two, and shielded people can come out like level one and Nando’s is back and I am a tiny man controlling the engine of my body.

This ketamine, which is pharmaceutical-grade, will help me and my fleshbot absorb the worst impact of the second wave which is coming because of the wet-brained confusion of the above.

Children do not catch the virus, playgrounds are closed, pubs are closed but large groups may congregate outside, up is down and Dominic Cummings acted within the law and guidelines.

We have achieved almost nothing and are about to throw it away. Horse tranquilisers are available at all veterinarians and will be prescribed freely.