A MAN always eats the bit of chocolate at the bottom of a Cornetto first instead of saving it until the end like a normal person.

Office worker Tom Logan appalled friends after being given one of the Italian-style ice creams, unwrapping it and immediately biting into the pointy end, going against all Cornetto conventions.

Logan claimed: “It’s the best bit, a big lump of chocolate, so why wouldn’t you eat it first? How the hell could that possibly be wrong?”

However friend Emma Bradford said: “He was like ‘Yeah, of course I’ll have a Cornetto’, which was fine, but then he started eating it from the fucking bottom.

“Any sane person knows you eat the ice cream, little chocolate bits and nuts first, while gingerly whittling away at the slightly odd-tasting cone. I’ve never seen anything so weird, and I’m a doctor.

“I was going to invite Tom over for Sunday lunch but I won’t now because he’ll probably grab the chicken, wolf it down bones and all and leave the boring boiled carrots till last.”

Logan’s friends have confirmed they are now choosing to distance themselves from him in case he is into other deviant activities such as necrophilia and Advanced Dungeons & Dragons.

How much more of a twat can Morrissey be? 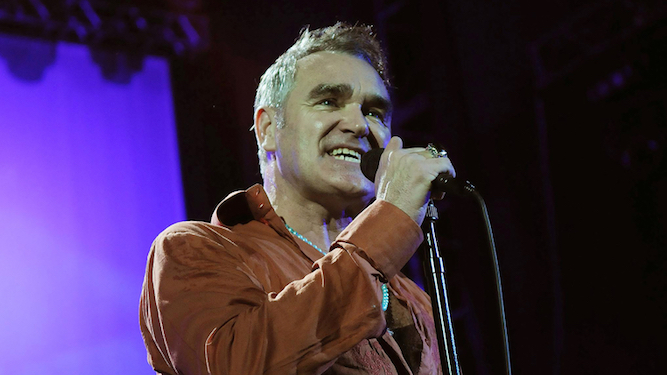 MORRISSEY has once again depressed everyone by wearing an anti-Muslim ‘For Britain’ badge. But can the former Smiths singer become a bigger knobhead? Here are some suggestions.

Reform The Smiths but with Tommy Robinson instead of Johnny Marr

While hardcore fans will be overjoyed by a Smiths reunion, it is unclear whether right-wing agitator-cum-yob Tommy Robinson is a skilled guitarist with a knack for the classic riffs that made What Difference Does It Make so memorable.

Brexit Party oddball Ann Widdecombe would be the ideal bride for sexually ambiguous Steven Morrissey. To complete the horror of his flirtation with right-wing politics she could join him onstage to deliver a 15-minute rant about the evils of the EU.

Probably the only thing Morrissey has going for him at the moment is his vegetarian principles, but this could easily be undone by scoffing Ginsters Steak Slices or a factory-farmed chicken onstage. Diehard fans would probably claim that eating a large pork pie was an ironic comment on Islam, however.

This would be as far as Morrissey could go with right-wing iconography, but maybe he should just get it over with and go back to writing enjoyably depressing songs about the seaside and living in a bedsit.