FOOD consumed while you are cooking still counts as food, nutritionists have claimed.

Members of the public were taken aback by the news that items gobbled down while preparing meals are genuine food and could even make you fat.

Keen amateur chef Nikki Hollis said: “This can’t be right. I take a nibble here and there while I’m cooking but that’s not eating, it’s ‘sampling’.

“Even if food you eat while cooking somehow contains calories, I’m burning them off with all the stirring. It’s a workout in the kitchen. A workout with wine.”

Hollis admitted she had polished off an entire block of cheddar the previous night while making macaroni cheese – necessitating a trip to the shop to buy more – but did so in “really thin slices” so it did not count.

However experts confirmed that these calories, despite being eaten standing up near a cooker or chopping board, still functioned in the same way as others.

Nutritionist Tom Booker said: “You are not ‘tasting’ the stew if you’ve eaten six potatoes, three sausages, half the sauce and an unrelated packet of cooked prawns you saw in the fridge.”

Hollis said she would bear this in mind, but until there was more scientific evidence would continue to eat a family-sized bar of dark chocolate while baking a cake. 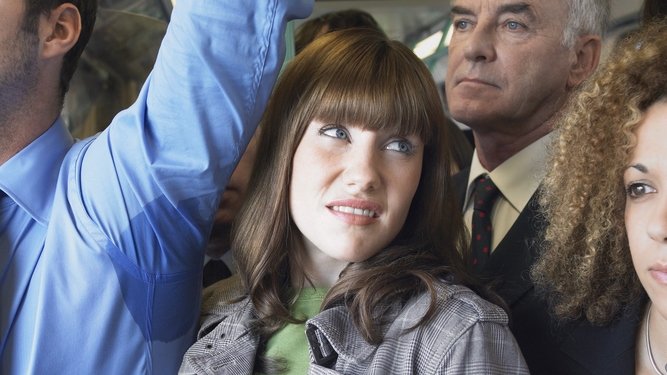 COULD the time you spend travelling to work be used for something more productive than sitting in silent, festering rage like a serial killer? Here are some suggestions.

Being crammed nose to armpit in a tube carriage makes you want to kill, so channel those disturbed thoughts into a book. If The Northern Line Decapitator becomes a bestseller (with film rights) you’ll never have to go on a train again.

Calming music is usually whale noises or New Age pan pipe toss, but commuting is so stressful anything will do. Stick on some Norwegian death metal or drill tracks about gang warfare and emerge relatively chilled at the other end.

Talk to your fellow commuters

Why not strike up a conversation with the person sitting next to you? People are always complaining no one chats on the tube, so they’ll be delighted when you tell them you’re not really a psychopath.

Find a violent game for your phone – perhaps endlessly bludgeoning zombies – and imagine they’re the awful colleagues you’re about to spend the rest of your precious day with. This will use up all your animosity and leave you happy and relaxed. In theory.

Look for a new job

Commuting is a good opportunity to find a new job, but make sure it’s one that doesn’t involve travel or other humans, like lighthouse keeper or leading expert on isolated African ant colonies.