A WOMAN eats a bowl of porridge each morning that is made up of 11 per cent oats and 89 per cent a load of other crap, it has emerged.

Lauren Hewitt adds such a varied medley of fruit, seeds, nuts, milks, yogurts and powders to her breakfast that it can barely claim to be porridge at all.

Her boyfriend Oliver O’Connor said: “She puts so many added extras in that it looks like a Holland & Barrett has vomited into a bowl. Although Lauren wouldn’t shop at Holland & Barrett, as she says it’s the Lidl of health food shops.

“Instead she’s spending a fortune in a specialist online store on organic ground flaxseed and other shit that looks and tastes like dust, all of which costs much more than normal food and has been recommended by her yoga teacher. Who I’m sure she fancies, by the way.

“With all the nuts and berries and stuff she says she’s getting over 800 per cent of her GDA of vitamins and fibre and feels amazing, but all I’ve noticed is that she farts like a trooper. Her yoga class must smell like a farmyard.”

Hewitt said: “It’s a f**king horrible breakfast but I’m determined to stick with it as I know how good it is for my smugness levels.”

How to waste your life browsing crap in charity shops 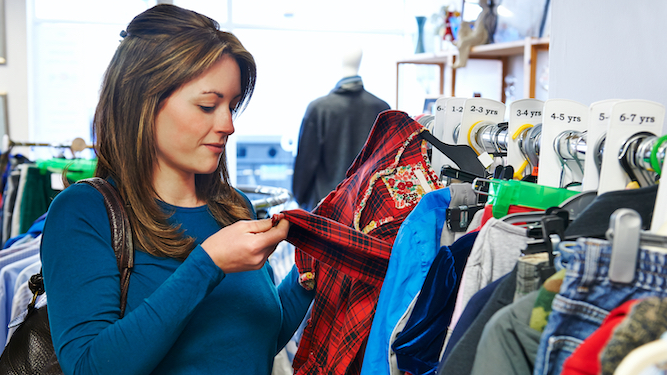 WANT to squander your one and only life while browsing other people’s unwanted tat? Here’s how to go about it in a charity shop:

Instead of buying new clothes that actually fit you and look good, pop into the changing rooms with a pile of ratty old togs that somebody probably died in. They’ll smell worryingly musty and be grossly unstylish, but hey, they’re only slightly more expensive than the ethically suspect fast fashion you usually wear.

Look through the books

Translation: sift through the dozens of books by Dan Brown and Ian Rankin in the desperate hope that you stumble across something interesting or valuable. Unfortunately, you’re not going to find a first edition of Harry Potter and the Philosopher’s Stone worth £11,000 in Huddersfield British Heart Foundation, so it’s really not worth the tedious waste of time.

Is there a format that’s more dead than CDs? Vinyl’s come back with a vengeance and even tapes are undergoing a retro revival, but CDs are just cluttering up the nation’s charity shops because they’re obsolete. The volunteer on the till would give away the shop’s nine copies of David Gray’s White Ladder for free if they could.

There’s always a shelf cluttered with tacky porcelain egg cups or commemorative plates and looking at them should kill five minutes while whoever dragged you in here busies themselves in the shoe section. Make a game of it by trying to imagine what sort of weird bastard owned shit like this, before realising your house has cupboards full of similar stuff.

Spending a never-ending hour in a charity shop isn’t a complete waste of time if you have something to show for it, like a mug that came free with an Easter egg in 1996. But to truly piss away your life make sure you emerge with nothing. Then hit the six other charity shops on the street and rinse and repeat.