Post-Brexit replacements for the Italian foods you've come to love

EU COUNTRIES are hostile enemies of Britain, so you need British subsitutes for your favourite Italian meals. Try these ideas:

If you think about it, pizza is nothing but fancy-pants cheese on toast but a dash more ketchup than you’re used to. Put four slices of white Sunblest together, trim into a circle, add sauce, cheddar and pre-cut discs of Spam, then stick in the oven. You’ll never know the difference.

Teaspoonfuls of Bovril, frozen in an ice-cube tray, look just the same and are just as unpleasantly salty without being all poncey and Mediterranean. Put them on your home-made pizza before grimacing, removing and binning them, just like the real thing.

To recreate the holey goodness of a wedge of focaccia, just take a hammer to a couple of pieces of pre-moistened Ryvita. Sprinkle on too much salt for that ultra-authentic feel.

Either shave the hard skin off your feet, or leave cheddar out until it’s hard, then smash it up. Foreigners only bother with other cheeses because they haven’t got cheddar. There is no problem it cannot solve.

Simply pour some Kenco instant coffee over a Greggs’ cream finger doughnut and wait for it to go soggy. Done deal. No need for the fancy name and all the fuss.

Bog off Italy, we all know butter tastes better. Melt it in a pan if you can’t survive without pouring it. Yes, it’ll probably bump you off quicker than olive oil, but with the current economic forecast and general state of the world, you’ll be doing yourself a favour. 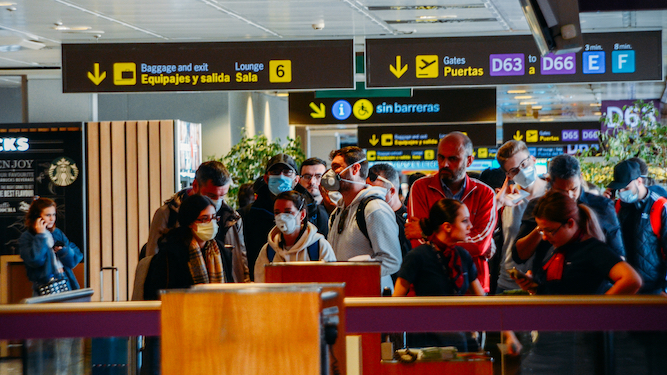 THE goverment has clarified that when it said ‘go to Spain’ it meant ‘prepare for a fortnight’s house arrest and possibly losing your job’.

Tourism minister Nigel Huddleston has confirmed that anyone who did not stockpile 14 days food and warn their employer they may need an additional two weeks off was not listening hard enough.

He continued: “When we said ‘it is imperative that you help Britain’s struggling travel and tourism industry by holidaying in Spain, where you will be welcomed as a hero’ there were a few caveats.

“Namely that you go at your own risk, that if there’s a Covid spike and you’re unable to leave the country that’s your problem, and that when you get home you’re back in the house for two weeks.

“We’re encouraging employers to be understanding, which they won’t be, and we’re offering no other help of any kind. Do be careful getting home from the airport, won’t you?”

Plasterer Jordan Gardner, returning from Ibiza, said: “I’ve already been out of work half the year. Loads of lads are getting laid off. I take another fortnight now, I’m fired.

“So I’ve said I went to Turkey instead.”