Harry Potter Books 'All Made Up' Says Rowling

AUTHOR JK Rowling has revealed that no one is going to die at the end of the final Harry Potter book because she "made the whole thing up".

In a move that will devastate millions of 35 year-olds, Rowling confirmed that the entire Harry Potter series has been a fantasy she created in her head, and that none of the people in the books really exist.

Writing on her website, Rowling said she realised this might come as a shock to many of her grown-up readers because they were all "obsessive twats" with little connection to reality.

She said: "There will always be sad individuals who get their kicks from reading rubbishy fantasy like Harry Potter. Thank god.

"But all this nonsense about who is going to get killed at the end of the last book is getting on my tits. No one's getting killed. It’s just a book."

Rowling said she had no idea where all the wild rumours regarding the plot of Harry Potter and the Deathly Hallows were coming from.

She added: "All this stuff about Harry hopping off the twig is just a load of old cock, probably put about by the marketing department. Thank god.

"In fact the series is going to end on an upbeat note with Harry and Ron Weasley finally consummating their love for each other, but only after a civil partnership ceremony in the grand hall at Hogwarts. Some children may get hold of the book after all.

"Regular readers will know that both the lads have been exploring their sexuality over the series, but this has progressed beyond the earlier curious fumblings into a deep love that Ron and Harry want recognised, and accorded respect.

"Tragically, if you believe this kind of rubbish, Hermione Granger does snuff it thanks to a bad prawn at Harry and Ron’s wedding breakfast. Dumbledore also cops it after falling down the stairs drunk. But that is actually quite a funny scene. It certainly made me laugh."

Rowling said she was unconcerned about revealing the ending to the final Potter installment ahead of publication as hardly anyone could get through her books anyway.

She said: "Even I have not read one right through to the very end, and I wrote them. It's much easier to just watch the films." 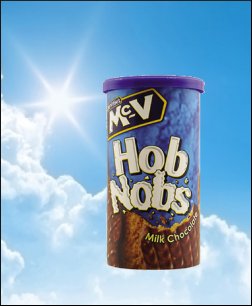 AMERICAN televangelist Jerry Falwell has launched an outspoken attack on Heaven after arriving there this week describing God’s Kingdom as looking like a ‘puff’s paradise’.

The conservative US preacher, who died on Tuesday, has told friends he is disgusted by the camp décor of Heaven, which he said looked more like Liberace’s bedroom than the final resting place for Christian souls.

So alarmed is the Rev Falwell by the amount of white drapes, scatter cushions and gold leaf on display in Paradise that he has told friends he suspects God may be gay or, worse, an interior designer.

Jeremiah Johnson, a close confidant of the deceased preacher, said the Rev Falwell was “going apeshit” and had accused God of undoing all the good work he had performed on Earth.

He said: “The Reverend has devoted his life to fighting gayness in all its forms, particularly the importation of homosexual design flourishes into the normal family home.

“He had fully expected Heaven to be a model of the restrained heterosexual style he has championed instead of which it is decked out like some cross-dressing tart’s boudoir.”

A spokesman for God dismissed the Reverend’s criticisms of the Holy Father’s taste in interiors and said Falwell should “lighten up”.

He said God was looking to create a soft and unstructured look suitable for souls to relax in for the long periods they would have to spend in Heaven.

“The last thing he wants is people stuck in rows of hard-backed pews with their arses going numb after half an hour,” he said.